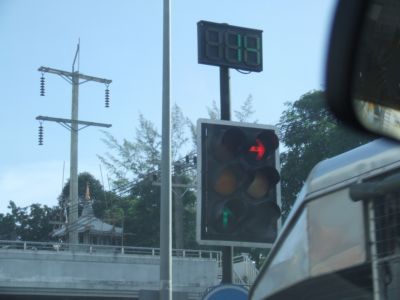 PHUKET: Drivers are likely to have noticed new countdown displays that have been installed at eight Phuket intersections recently.

The work has been funded by the Phuket Provincial Administrative Organization to the tune of three million baht.

The intersections where the countdowns have been installed are at Phuket International Airport, Bangku, Samkong, Darasamut, Wat Naka, Kajornkiat School, Laemchan and Ban Teen Khao.

Mr Wattana said each countdown changed automatically depending on the time of day.

If traffic builds up too much at any particular intersection, the lights can be set to flash and the police will step in to control the situation, he said.

Darasamut Intersection, close to Central Festival Phuket, has the longest traffic jams in Phuket, he said.