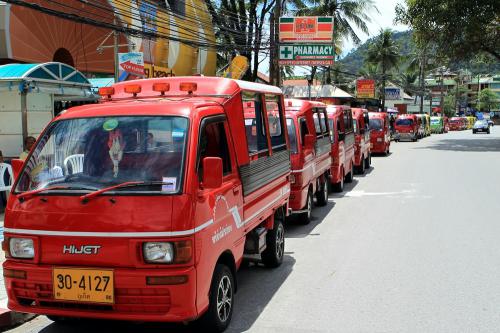 PHUKET: Phuket’s top cop promised yesterday to push tuk-tuks and taxis off of some of their regular patches, including Patong beach road, in order to create parking spots for the general public.

“We’ll have new parking zones set up in two weeks,” he said.

Police called in the heads of every taxi stand, as well as the people who lend drivers parking places, to make it clear that tuk-tuk and taxi drivers could not take up entire streets waiting for customers.

“We made them understand that they need to give some of the parking places back to the public,” said Phuket Provincial Commander Ong-art Phiwruangnont.

Maj Gen Ong-art made his promise at the fifth follow-up meeting to the establishment of the Department of Special Investigation’s organized crime center.

At the meeting, chaired by Phuket Governor Maitri Inthusut, Gen Ong-art described the results of his investigation into illegal taxis on the island.

“The problem is that some groups of people are selfish and greedy. And we can’t get rid of them instantly, because they’ve been here for so long,” he said.