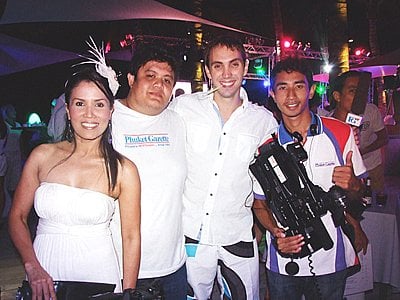 PHUKET: ‘Phuket Today’, the island’s only national television show, has just been awarded a prime time slot on Thailand’s pre-eminent cable television provider, UBC/True Visions. The weekly half-hour show now kicks off at 7:10pm on Sundays, and is then re-run six times for a total of seven appearances every week.

The vast majority of the program’s footage is shot on location at the island’s major lifestyle venues (high-end resorts, restaurants, golf clubs, beach clubs, marinas, etc), the MCOT mission being “to showcase the best of Phuket, with emphasis on the places and people, particularly expats, that have contributed to the island’s success as a vital tourism draw for Thailand, and a desirable place to live for foreigners.”

With regard to foreigners, ‘Phuket Today’ is instructed to ask all interviewed why they came to Phuket and why they like it here. We’re also instructed to find “unique” foreigners, most recently an expat monk. (Anyone who can help with this request is asked to contact PGTV producer Simon Hand on 089-472 1010.)

Join us this Sunday (7:10pm, channel 99, UBC/True Visions) to learn why Ian Jamieson wants to ‘ride’ his motorcycle over the spinning blades of a helicopter in flight; to meet the people and witness the action at last weekend’s world-record reef cleanup; and to join Phuket’s largest annual party at Catch Beach Club where tourist pricing is ‘out’ and the people are ‘in’.

Local residents and the management of key lifestyle venues on Phuket are encouraged to get involved in ‘Phuket Today’ and to help in putting the island’s best foot forward. To do so, contact Kristi at PGTV: 080-690 2564.

“His reputation has already been affected by his unsuccessful….”