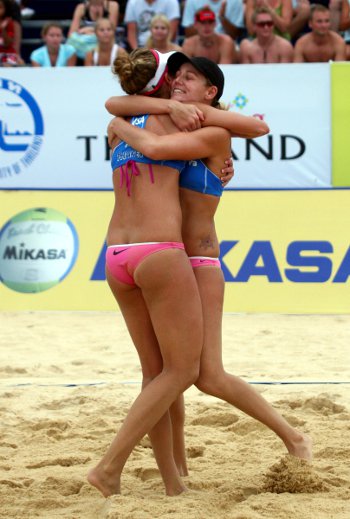 PHUKET: It has been confirmed that the Swatch FIVB Beach Volley World Tour will once again have a stop in Phuket, with this year’s Phuket Thailand Open to take place on the sands of Karon Beach from November 2 to 7.

More teams competed in last year’s event than in any other tournament on the Beach Volley World Tour. This year, a record number of teams are expected, as it will be a chance to warm up for the Asian Games in Guangzhou, China, November 12 to 27.

The tournament, with US290,000 in prize money, starts with “country quota” play-offs among teams from countries with more than four teams entered in the tournament.

Qualifying is held on November 3 and the main draw runs from November 7. As well as the main event, a number of other activities are planned, including an amateur tournament among hotel workers, beach volleyball clinics for kids, a variety of on-site entertainment and a beer festival.

This year’s event should also be a boon for tourism, as hundreds of players from around the world are expected to fly in to take part in the Beach Volleyball ‘Around the World’ (BVAW) event that will run concurrently.

This included the current Olympic champions and 2009 World Champions April Ross and Jen Kessy of the United States, who will be gunning for their third successive win in Phuket.

This event is sponsored by the Phuket Gazette and PGTV.