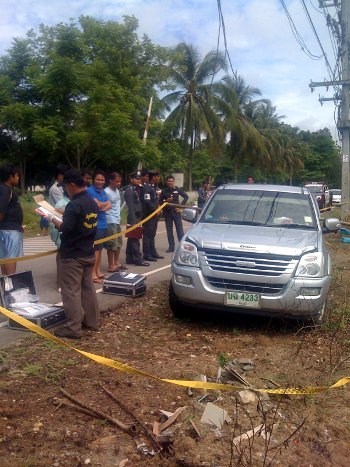 PHUKET: Phuket police are investigating the murder of a man and woman whose bodies were discovered thrown off a cliff along a coastal road in Thalang this morning.

The key witness, a man who apparently escaped the same fate by playing dead, is now in police custody and under heavy guard.

Tah Chat Chai Police were notified of the deaths at 8:30am by villagers just south of Nai Thon Beach.

The villagers were alerted to the deaths by the man, reportedly also the target of the multiple homicide.

The man told them that after he regained consciousness, he scaled eight meters up the cliff to the road in search of help.

He alerted police to the location of the two bodies, which were pinned against trees near the waterline.

One of the victims was a Thai man in handcuffs. He apparently died from a gunshot wound.

The other victim was a woman whose eyes were covered in a makeshift blindfold and her hands were bound by rope.

She apparently died of a blow to the head with a blunt object.

Kusoldharm Foundation workers arrived to begin the difficult task of recovering the bodies.

Police have released little information about the case, except to say that a pickup truck used by the victims was found near the Muang Thalang School.

They have not released the identities of the two deceased or the survivor.

Kusoldharm Foundation workers transported the bodies to Thalang Hospital for further examination and to be claimed by relatives.