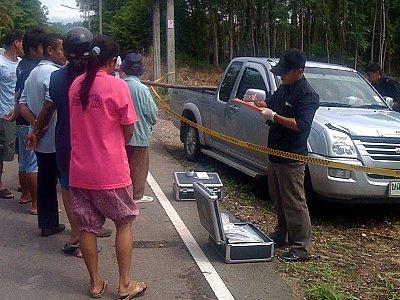 PHUKET: The man who allegedly survived an attack in which his wife and another man were killed has said the trio were attacked by a group of men.

Sanit Choocheun, a 54-year-old construction contractor from Krabi, said he survived the attack by playing dead.

The bodies of Mr Sanit’s wife, Urai Limsakul, 50, and the other man, named only as ‘Lek’, were found this morning at the bottom of an eight-meter seaside cliff south of Nai Thon Beach.

The victims’ truck with Krabi license plates, Bor Chor 4233, was found near Baan Pa Khlok Cheep. There were blood stains in the bed and inside the truck, police said.

Ms Urai’s hands were tied behind her back. She had a gunshot wound and appeared to have been hit in the head with a “heavy” object.

Mr Lek had been shot once in the head and once in the chest, and his throat was slashed, police said.

According to the police report, Mr Sanit said, “I came from Krabi to pick up my wife and Mr Lek. When I was returning to Krabi last night, someone called my wife and asked to meet at Baan Pa Khlok Cheep Road.

“However, when we arrived there many men were waiting for us,” Mr Sanit said.

“They tied all three of us up – our hands and our feet – and blindfolded us before pushing us into a car and taking us somewhere. They stopped and then I heard someone hitting Lek and Urai. Then I heard gunfire,” he said.

“Then the men started beating me, so I pretended to be dead. I was hoisted into the air and I could feel myself falling. Then I heard a car start and drive off.

“I managed to undo the rope binding my hands and feet and removed the blindfold, and climbed back up to the road,” he said.

Police said they are not convinced Mr Sanit’s statement is entirely accurate and are investigating the attack in line with three potential motives: a construction business deal gone wrong, drugs, and adultery.