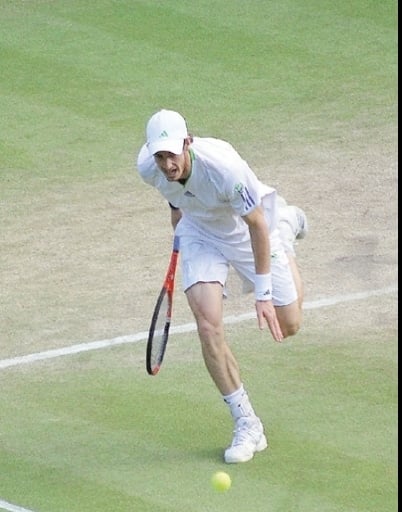 Murray survived an early scare losing the first set to fight back 6-7(5) 7-6(6) 6-4 7-6(4). The Scot returned back to action on the center court after his fourth round victory on number one court. The home crowd were trying their best to lift his spirits after he lost the first set in a tie-break.

The crowd did its job with Murray taking the match three sets to one, though three tie breaks were required. The contest lasted 3hrs 52 minutes, and was disrupted by the obligatory rain delay in the 4th set. Murray served his 18th ace of the game to win the match and set up a semi final date with Jo -Wilfried Tsonga who knocked out Philipp Kphlschreiber 7-6(5) 4-6 7-6(3) 6-2.

Roger Federer put on a regal display to defeat Mikhail Youzhny in straight sets 6-1 6-2 6-2. Federer’s match was watched by the Duke and Duchess of Cambridge and Andre Agassi.

“I think it helps when royalty shows up and other legends of the game come to see me play,” Roger Federer said afterward celebrating his straight sets victory.

The men’s semi-finals will be played on tomorrow with the final scdeuled for Sunday July 8.