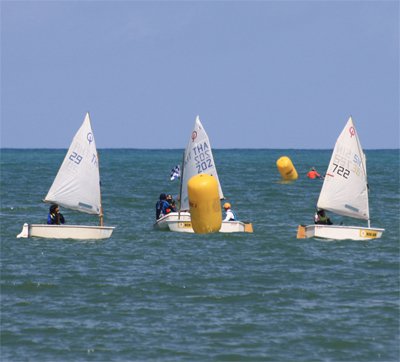 PHUKET: The Phuket Dinghy Series, launched in 2010 by the organizers of the Phuket King’s Cup Regatta, returned over the weekend ending yesterday. The series comprises three weekend events at different Phuket locations in the lead-up to the King’s Cup.

Santi Kanchanbandhu, a member of the Phuket King’s Cup Regatta Organizing Committee, explains what the Phuket Dinghy Series is:

“We provide a variety of sailing conditions at different locations, giving the youngsters a mix of experiences and testing their sailing skills. A big part of each weekend event is the sailing clinic, which is lead by an experienced sailor who can give advice and tips to the youngsters, and help them improve their skills and technique.”

Strong winds and rolling seas summed up the first day of racing, but the rain held off, and the youngsters tested both their technique and strength over the three races.

The sun appeared yesterday, and with blue skies and calmer seas it was a very different sailing experience.

Rising star Anaphat Ngamdee from Chonburi was undefeated in the first event for the Optimist Class, winning six from six.

Places were swapped through the rest of the fleet with Songkhla native Chareef Rakpongbandit holding out to take second overall by one point from Phuket youngster Sumet Pandam.

In the Laser Class, numbers were down a little from last year’s series, but the competition was still high with another Chonburi native taking the win, Akarapong Chayim, with six from six. Phuket-based Teeranai Petcharat finished second, with Songkhla’s Jittawat Boonrat in third.

The event was established with the aim of providing youngsters with an opportunity to sail competitively in Phuket, and test their skills against sailors from other regions.

People from Phuket, Phang Nga, Songkhla and as far away as Chonburi took part in the event.

The next event will take place October 27-28 at Bang Tao Beach, with the final event of the series taking place off Cape Panwa over the weekend of November 24-25.