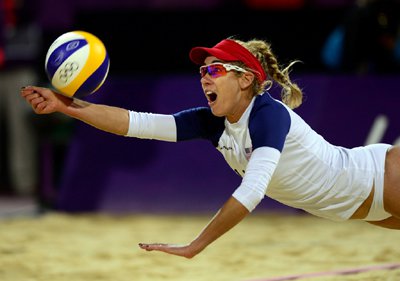 PHUKET: A group of school children on Phuket played its part in helping the American pair of Jennifer Kessy and April Ross reach the recent Beach Volleyball Olympic final.

Last year the duo competed in the Fédération Internationale de Volleyball (FIVB) Women’s World Tour in Karon and took some time out from competing in their tournament to watch a school tournament that was taking place at the same time.

Teams from four schools on Phuket competed in the event where SOS Children’s Village emerged victorious.

SOS Children’s Village is located next to Royal Phuket Marina and was set up to help disadvantaged children and those affected by the 2004 Tsunami. The Village has twelve family homes that house 120 children, a community house with medical room and a kindergarten.

Bob Selznick organized the school volleyball tournament and it is through him that the American duo decided to try and help the girls from SOS Children’s Village. Bob met the American pair in California a number of years ago when they were just getting started on the volleyball scene and bumped into them again at Karon.

Jennifer and April watched the school tournament and took an interest in the girls team from SOS Children’s Village, asking Bob what the girls needed in terms of beach volleyball equipment.

After leaving Phuket and heading back to America, Jennifer and April sent balls, FIVB tops, autographed pictures and money to use to buy and design uniforms.

As a show of support and to thank Jennifer and April, children from the village sent the girls good luck messages and pictures to help support them in the Olympics.

The sports stars plan to visit the Village to practice with the girls when they return to Phuket later this year to compete in the FIVB Women’s World Tour.

April and Jennifer put up a spirited fight against fellow Americans Kerri Walsh Jennings and Misty May–Treanor in the Olympic final, but lost in straight sets.

The girls will take some heart from the fact that Jennings and Treanor won their third straight Olympic gold medal to cement their place as the greatest ever beach volleyball team of all time.

April and Jennifer reached the final in their first ever Olympics.

The duo are expected to be at the FIVB Women’s World Tour at Karon later this year and they will no doubt have inspirational advice to share with the children at SOS Children’s Village about their Olympic journey.