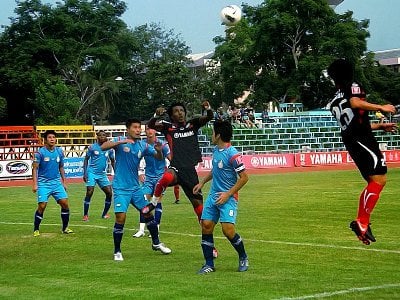 PHUKET: The Islanders are well positioned to secure their Division 1 status ahead of the final game of the season thanks to a 4-1 away victory to Rajpracha FC on Saturday evening.

Played at Mahidol University’s Salaya campus, about an hour’s drive west of Bangkok, the 33rd match of the 34-fixture season was attended by about 500 spectators — half of which were rooting for the away-team.

Going into the match, Phuket were ranked 14th in the 18-team league, the final relegation spot.

The Islanders were under pressure knowing that a victory was necessary to remain in contention and thus avoid the dreaded Division 2 regional leagues next season.

Their 17th-placed opponents, one of the oldest clubs in the Kingdom, nicknamed the “Crowns”, had no mathematical chance of escaping relegation, and were playing for pride.

Despite a number of set plays, earned by the home team early on, it would be the visitors’ attacking threat that proved more potent.

Phuket went up 3-0 in the first half, with goals scored by Kornprom Jaroonpong, Nattakorn Wisetthanakarn and Thawin Butsombat in the 20th, 24th and 42nd minutes, respectively.

The Crowns’ response finally came at the start of the second half with Korean import Woogeun Jeong converting a lighting-speed drive and assist from Ghanaian teammate Victor Mensah.

Though having a two-goal lead, Phuket tightened up their defenses as Rajpracha tried desperately to narrow the deficit.

It would be the visitors who got the next and final hoorah, however.

Awarded a corner kick with only five minutes remaining in the match, Phuket’s captain Nonthapan Jiensathawong decided to play a short ball to a speedy Narakorn.

Finding some space on the left wing, Narakorn sent a piercing pass into the box, where Ivorian defensive stalwart, Nenebi Slyvester was perfectly positioned to divert the ball into the back of the net with a beautiful single-touch reflex.

Despite a number of near scoring chances from both sides, the score remained 4-1 at the final whistle.

The result moved Phuket back up into 13th-place, just one spot above the 5-team relegation zone.

If the Islanders prevail in their next and final match, a home-fixture against 16th-placed JW Rangsit FC, then they will be safe from relegation.

A loss or draw, however, will put the team’s fate into contention with the results of other final-day results in the league.

Pattalung, who are set to host already-promoted Bangkok United in their final match, cling to a narrow thread of hope that requires them to prevail by a heavy goal margin, and for Phuket and Songkhla to also suffer heavy defeats.

Considering the fact that Songkhla play Chanthaburi, the only team to not win all season, and Phuket’s opponents are also only playing for pride, most have already written off Pattalung as the fourth relegated team.

Songkhla, meanwhile, will survive if they win and Phuket lose.

A prevailing Southern Fighting Bulls side may still advance if Phuket win, but only if 12th placed Khon Kaen is defeated in their away match against 10th placed Saraburi FC.

Note: In the event that teams are tied on points, then their previous head-to-head record is used as priority over goal difference comparisons in determining who goes and who stays.

All will be decided in the season finale on Saturday, October 27, 2012, with all games to kickoff at 4pm.

Likewise, Phuket’s match against JW Rangsit will be played at Surakul Stadium at 4pm.