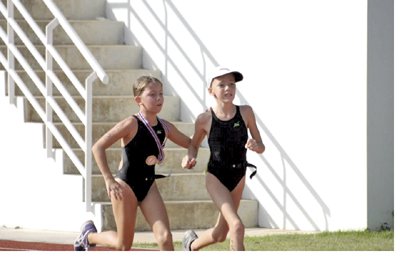 PHUKET: The Phuket Gazette continues its build up to this year’s Thanyapura Sports and Leisure Club IronKids on December 1. This week, Dutch twins Chloe and Maxime Schrijnemaekers, 10, are the featured IronKids.

Phuket Gazette: Why do you compete in IronKids?
I really like the sport and love doing three sports combined into one event. Also, it gives me butterflies in my tummy before I start and I love that.

Which is your favorite part of the IronKids race – swim, bike or run? Why?
Running. It’s the toughest part because of the heat and it’s the longest but it’s my favorite.

You can hear everybody cheer you on and during the swim and bike you can’t really hear that.

Which is your hardest part of the IronKids race – swim, bike or run? Why?
The swim. When we swim together, we all try to push through and you can feel the hands and feet of other athletes hitting you.

What do you hope to achieve at this year’s IronKids?
I will try swimming harder and try to be faster on my bike. To finish first and beat all the other kids in my age group would be great.

Max and I did well in the races last year but I was sick for the last trial. This year, I will have to make sure I’m healthy.

What other sports do you play?
Tennis.

When did you start competing in sporting events?
I started swimming three and a half years ago with my sister and our friends. I have competed in events in Thailand and a big event in Perth.

Why do you like them (sporting events)?
They are very exciting and I enjoy the competition. When I train and compete with my friends it’s not really like crossing a real finish line.

Who are your favorite athletes?
Usain Bolt, Roger Federer and coach Jurgen Zack.

What does being an IronKid mean to you?
A lot, it’s special to be an IronKid. It feels good to fight for it. I’m working really hard, so when I finish an Ironkids race, I feel good and really proud.

It’s also really nice because you have your friends with you and even during the race you’re still friends, but you also have to try to beat them.

Max and I love each other, but sometimes we have to try to beat each other, which is fun and exciting but also tough, because we are sisters.

Phuket Gazette: Why do you compete in IronKids?
I like the sports and the fact that there are three totally different sports in one event.

Which is your favorite part of the IronKids race – swim, bike or run? Why?
Running. I have always loved to run and I’m really good at it. I am better at long distances than short distances.

Which is your hardest part of the IronKids race – swim, bike or run? Why?
The bike ride. I’m not the best at it, and like it the least of the three. I train at it but need to train harder. During the race it’s much tougher and harder than during training.

What do you hope to achieve at this year’s IronKids?
I want to win and improve my bike and swim races. My sister and I are always strong but it’s getting tougher as we get older, because other kids are getting stronger.

I love it, but I have to fight my own sister to win.

What other sports do you play?
Tennis (and Tag hahaha…).

When did you start competing in sporting events?
Three and a half years ago, I competed in my first swim events in Thailand and Perth. Then I discovered Ironkids and started to do Ironkids events and tennis tournaments.

Why do you like them (sporting events)?
I train for them and when I do the event I get excited and feel that I’m getting better at it and more experienced.

Who are your favorite athletes?
Usain Bolt, Rafael Nadal and Jurgen Zack.

What does being an IronKid mean to you?
It means a lot to me and I’m so happy I’m doing this sport.

When I watch the professionals, it looks very cool when they do the swimming, cycling and especially the running, they look exhausted at the end.

When I’m doing it, I relate to that and it feels cooler, especially when I cross the finish line and I can’t feel my legs.

The TSLC IronKids Phuket Series 2012 is proudly sponsored by the Phuket Gazette, PGTV and the nationally televised Phuket Today show on UBC/True Visions.