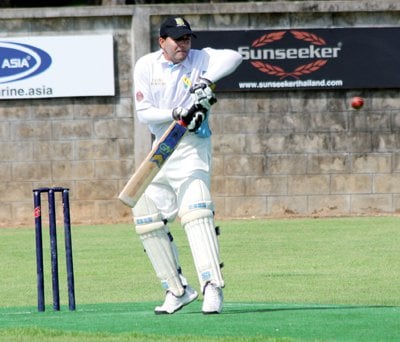 PHUKET: ICC and Patong met for the second time in the Outrigger T20 league last Sunday at the Alan Cooke Ground (ACG) with both teams keen for victory to join Laguna on top of the table and move a step closer to securing a finals berth.

Despite heavy rains during the week, the ACG once again came up trumps with no visible signs of the field being affected. ICC captain Anand Chand won the all important toss and chose to bat.

ICC only managed a total of 103 runs from their 20 overs due to some very tight bowling from Patong. With such a small target to defend, ICC looked down and out. However, some equally impressive bowling, in particular from Imtiyaz Mushtaq (3 for 13) and Pawan Kothari (3 for 4), resulted in Patong being bowled out for only 79 runs in the 18th over.

Patong struck early in the ICC innings with Marthinus Bester clean bowling ICC opener, Darren Norford (3). Surender Kumar (15) and Naeem Ul Haq (18) then joined forces for a 23 run partnership . Kumar fell in the 10th over, just before the drinks break, and ICC only reached 46 runs. A big increase in the run rate was required during the final 10 overs. ICC failed to gain any momentum and only Jared Norford (31 not out) reached double figures. At the end of their 20 overs, ICC had accumulated 103 runs for the loss of 6 wickets.

Patong got off to a bad start in their chase for victory, losing 3 wickets in consecutive overs early on. Only Mike “Mikey” Khan (18) showed any resistance in the top order. A wicket was lost in the 9th over and by the 10 over drinks break, Patong were 4 down for 46 runs. A good partnership was critical during the last 10 overs if Patong were to have any chance of winning. Manesh Sadarangani (18) and Patong captain, Anthony Van Blerk (13 not out) managed to put a 39 run partnership together. However, once Sadarangani fell, no other batsmen stepped up to the mark and Patong only managed 79 runs before their innings came to an early end in 18th over.

The win by ICC saw them join Laguna at the top of the table on 6 points.

This weekend’s action in the Outrigger T20 league will see Laguna take on the Village at the ACG on Sunday. With the Village coming off a recent win over ICC, they will be looking to upset the Laguna lads, which could make for a very crowded table if they pull it off.

The senior league will commence on Sunday 18 November 2012. Any one interested in joining a team or entering a full team should contact Martin Foster at clubaffairs@phuketcricketgroup.com.