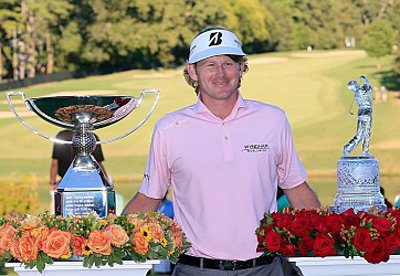 PHUKET: This week on the PGA tour saw the Tour Championship and the finals of the Fed Ex Cup played at the East Lake golf course in Atlanta, Georgia.

The course was in immaculate condition and the greens were similar to those at the Lakes golf course at Blue Canyon in Phuket, with subtle breaks, which make it difficult to read the first time.

Rory McIlroy and Tiger Woods were leading the Fed Ex reset points from last week, giving them the best chance to win.

Jim Furyk was the first to show his colors in the front nine on the second day with an outstanding 29, shooting 64 for the day and 7-under for the tournament. Justin Rose 66, 68 was 6-under and one shot behind.

The third round is moving day. Brandt Snedeker shot himself into contention matching Furyk’s 64 from the previous day to lead with Justin Rose, who was on 8-under-par; McIlroy, despite driving poorly off the tee, was hanging in there at 5-under, with Woods one back.

In the last round, the first six holes seemed to be making fools out of the best players in the world, especially the 6th. Double-bogies were common place and with 12 holes to go, the tournament was still up for grabs.

Woods was the first casualty 4-over-par through six holes and couldn’t rally from there, shooting 72 in the last round to finish a disappointing 8th for the week.

McIlroy fared no better, missing fairway after fairway leaving him too much to do with his second shots out of the rough. His consolation was second place in the Fed Ex cup.

Justin Rose who looked in control of his golf game all week, lost confidence on the greens in the last round, it looked like their speed was too much for him to handle. He finished with a 71, 7-under for the tournament to finish second.

Brandt Snedeker on the last round, went into an early two shot lead, but a double bogie on the 6th brought him back. However, his short game was red hot in the last round and by the time he came to the 18th hole he was 4 shots clear of the field. His bogey gave him a 68 for the day and a 10-under total for the week.

Snedeker picked up the Tour Championship and because of where Woods and McIlroy finished he won the Fed Ex cup outright.

On Phuket, the Ryder cup teams playing at Blue Canyon have been chosen. The European side have been preparing well for this event and team USA is starting to gather momentum. It should be a great contest between the two teams, – win, lose or draw. After their games, I’m sure they will be watching the Ryder Cup, which USA are hosting this year.

Golf Tip of the week: Pre-shot routine:
One of the things we like about Brandt Snedeker’s golf game is once he has made up his mind up to play his golf shot, he just gets on with it.

His pre-shot routine seems a bit twitchy but he does the same twitchy routine every time. We call this a process goal – staying in the moment. The same routine keeps him relaxed and this in turn creates consistent results each time.

So remember to keep doing the same routine that got you to where you are in the first place, this will help you feel more comfortable each time you hit your golf ball.