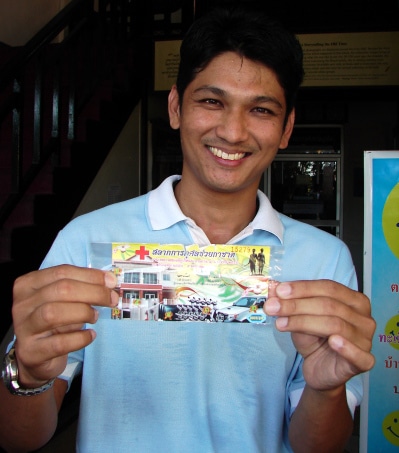 The 37-year-old Rayong native won the prize with his winning ticket number 15279.

Mr Tu, who has lived in Phuket for the past 16 years, told the Phuket Gazette, “Normally, I don’t have such good luck. I couldn’t believe it. At first I thought it was a con artist or someone like that.

“Then Khun Piroj, the chief of the Public Health Office in Patong, confirmed to me on the phone that it was true. I was shocked. Wow! Unbelievable!” he said.

“I would like to give this house to my wife for her to own in her own name as a gift for the new year. I already own two houses in Phuket,” he added.

Mohamad Unan is the village chief of Moo 5 in Tambon Koh Kaew.

“I bought one book of tickets from the Muang District Office for 1,000 baht. It’s great news – I have never won a lottery before,” he said.

“I went to pick up the car with my son. He’s 25 years old and spending his vacation at home [in Phuket]. He works a whole year away on a cruise ship in South America.

“I would like to give this car to him because I have two cars: a Volvo and a Hyundai,” he added.

Nopparat Wongchitsue, a 45-year-old, Phuket-born shopkeeper, was the first to claim one of the five motorbikes given away in the draw.

He runs a small grocery store from his home on Patipat Road in Phuket Town. At night, he also sells khao mun gai (chicken and rice) and noodles.

“I didn’t think about winning anything. I just bought the ticket when I walked into the fair,” he said.

“I love motorbikes. I have three already, but my friends come and borrow them all the time. They can borrow this one, too,” he said.