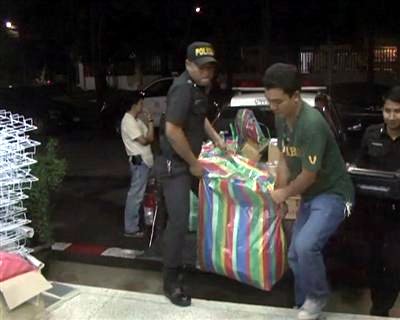 PHUKET: Coordinated raids on a counterfeit video manufacturer and three sales outlets have led to the arrest of six people and seizure of more than 30,000 discs, some of them pornographic.

Fifty provincial and Region 8 police officers divided into four teams set out from Phuket Provincial Police headquarters at 7pm on Wednesday night to make the arrests.

Joining them were representatives of the firms holding copyright licenses to a wide range of discs, including CDs and DVDs of Thai and foreign movies and music albums.

Carrying a search warrant, the first team proceeded to the Kathu Village 7 home of 33-year-old Kanokwan Suriyajan and her husband, whose name was not reported.

Inside they found computer equipment, printers and four 12-disc copy machines, along with some 10,000 titles, including movies currently playing in cinemas on the island.

Meanwhile, the second team arrested a Burmese man, identified only as “Gunshy”, in the act of selling counterfeit discs to foreign tourists in front of Dino Park in Kata.

His stock of 10,000 discs, supplied by Mrs Kanokwan, was seized as evidence.

The third raid took place in front of the Expo shopping arcade in Kata where police arrested 29-year-old Theerapon Wong-ngen and seized his stock of 5,000 discs.

Back at Phuket Provincial Police Headquarters for booking, police identified Mrs Kanokwan as the head of the network and owner of all four operations.

Her business had been running profitably for many years, allowing her to buy a nice home and car, they said.

Mrs Kanokwan confessed to charges of production and sale of counterfeit goods and her associates admitted to helping distribute them.

The effort is difficult because of the high demand for counterfeit discs and the ease with which they can be produced. This causes new distributors to spring up all the time, he said.

Get ready for the weekend in Phuket