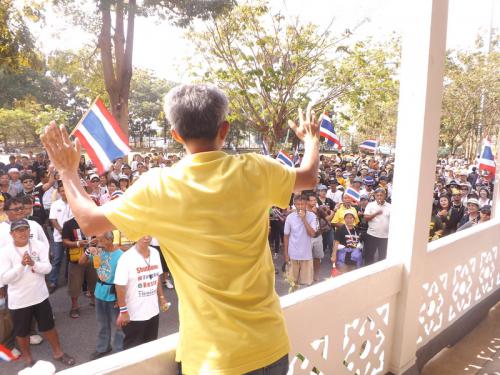 PHUKET: The protesters vacated Phuket Provincial Hall late this afternoon after holding the building all day to show support for the “Bangkok Shutdown” (story here).

“We agreed to leave Provincial Hall and establish our camp outside,” Former Rassada Mayor and protest co-ordinator Suratin Lian-udom told the Phuket Gazette. “We don’t want to be responsible for any criminal activity; we just want to support the big protest in Bangkok.”

On the main protest stage at Provincial Hall tonight, organizers will be giving speeches and airing Suthep Thaugsuban’s speech in Bangkok.

“We are expecting a lot of people to join us tonight once they get off work,” Mr Suratin said.

Protesters forced the closure of Provincial Hall for more than a week last month (story here), and asked again today that officials stop their work to show support for the anti-government rallies in the capital.

“I think we have their support. However, I will see tomorrow if they come to work or not,” Mr Suratin said.

Protesters have vowed not to hamper the work of the passport section of the Ministry of Foreign Affairs in Provincial Hall.

“We will allow the passport section to remain open, as we realize that everyone wants to travel,” Mr Suratin added.