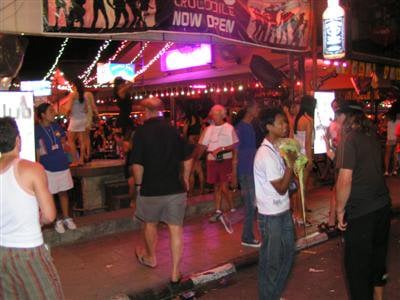 PATONG, PHUKET: Kathu Police have been unable to track down and question two Thai women seen entering a hotel room with an Australian man who was found dead by hotel staff later the same day.

Staff at the PS 2 Inn in central Patong discovered Mr Hickey’s body on his bed in room 304 at about 1pm on Thursday.

Mr Hickey checked into the hotel at about 3am the same day with two Thai women, staff told police.

When he failed to check out later in the day, staff knocked on the door and then used the master key to open the room.

Finding the goateed Australian dead on the large bed, they immediately notified police.

Police estimated the time of death at about 10 hours before the discovery of the body.

Lt Weerapong told the Gazette the deceased was an annual visitor to Patong.

He was staying with his wife and some friends at the Holiday Inn in Patong at the time, having arrived in Phuket on October 5.

His death came just a few days before he was scheduled to leave the island, Lt Weerapong said.

Mr Hickey’s remains were sent to the Police Hospital in Bangkok for further examination.

Australian Embassy officials and the deceased’s family are scheduled to repatriate his body to his home country tomorrow morning, he said.

Despite the strange circumstances and timing behind the death, it appears that the Kathu Police are no longer investigating the case as a possible homicide.

“It’s very sure that his death was not the result of murder because there were no wounds on his body.

“It was most likely the result of a heart attack, but we cannot be certain until we get the results of the autopsy report in two or three week’s time,” the police said.

A local blog quoted Kathu Police Superintendent Grissak Songmoonnark as saying Mr Hickey’s wife understood the circumstances behind his death and did not suspect foul play.

The same report also quoted a doctor at Patong Hospital as saying he suspected cardiac failure as the cause of Mr Hickey’s demise.

As for the Thai women who escorted Mr Hickey to his room, staff at the hotel told the Gazette they did not know what time the two left.

Lt Weerapong said police have been unable to locate the two woman for questioning.

Mr Hickey’s death is the latest in a number of mysterious deaths of foreign tourists staying in Patong.

Among the unsolved cases are the deaths of 22-year-old UK national Joseph John Nason in early November last year and the apparent murder of Danish national Henrik Rasmussen in February the same year.