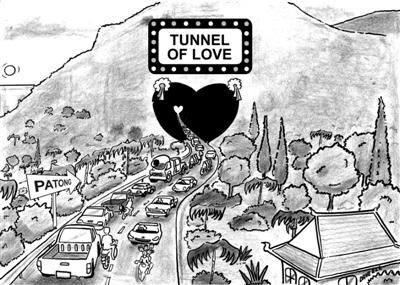 PHUKET: Of the many ‘megaproject’ ideas conceived for Phuket over the years, few have captured the public imagination like the ‘Patong Tunnel’.

Of course, the decades-old plan to build a world-class convention center somewhere on the island has been the subject of more ink, political infighting and expensive study over the years, but the idea of such a facility is far less captivating to most island residents.

The reason for this may be that at some point, most of us have found ourselves trapped for long stretches of time on steep sections of Patong Hill road due to the fast-forming tailbacks that occur there anytime there is an accident, no matter how minor.

The majority of these accidents are run-of-the-mill mishaps caused by the combination of overconfidence and carelessness that seems to afflict so many Phuket motorists.

In addition to these are the blockages caused by overloaded vehicles, large and small, that lack the horsepower to make it up the steepest gradients.

Then there are the more serious accidents that occur when unroadworthy vehicles – including tour buses full of tourists – manage to lumber to the top, but then lose their brakes on the way back down.

A number of issues quickly spring to mind whenever the idea of a tunnel to Patong reasserts itself in the media cycle.

First and foremost is whether a tunnel is really needed, given that the vast majority of accidents that occur on ‘Mount Mayhem’ are the direct result of negligence, not the condition of the road itself.

The 40-million-baht price tag of the feasibility study now underway has also raised the eyebrows of many island residents, many of whom cynically write it off as a waste of taxpayer money.

Despite such cynicism, as this goes to press the latest Gazette ‘Readers’ Poll’ indicates a majority of readers in all three demographics (Thai, foreign expats, foreign tourists) agree that a tunnel would be ‘good for Phuket’.

Nevertheless, it remains difficult not to harbor skepticism when so many other basic infrastructure improvements desperately needed in Patong still wait to be addressed.

The result has been flooding, landslides, electrocutions, water supply shortages and the highest public transport fees – by far – anywhere in the kingdom.

Given this fact, it is fair to ask whether making it easier for even more vehicles to reach Patong will result in an improvement – or just add to the existing chaos.

Readers wishing to vote in the poll may do so by simply clicking here.