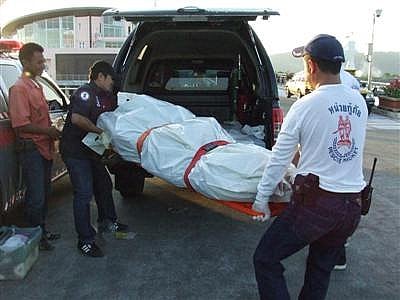 PHUKET: Chalong Police are trying to identify the badly decomposed body of a man discovered offshore at a popular Phuket dive site this afternoon.

The police were informed of the discovery at about 4:30pm, duty officer Atthawat Suwanarat told the Phuket Gazette.

The crew of a fishing boat discovered the body floating face down about 20 meters offshore from Koh Hei, also known as “Coral Island”, and reported it to authorities.

From there, Phuket Ruamjai Kupai Foundation workers transported the body to the morgue at Vachira Phuket Hospital for further examination and storage until it can be claimed by relatives.

Identification could be difficult, however, as the corpse was clad only in a pair of undershorts and the face was too badly decomposed to determine the man’s race.

Police estimated the time of death at five to seven days before the body’s discovery.

They suspect the body may be that of a foreign tourist because it was more than 170 centimeters in height and had a light complexion.

The discovery is the latest in a spate of unidentified bodies recovered by Phuket authorities this high season.

Alarm raised over dog-snatching in Phuket