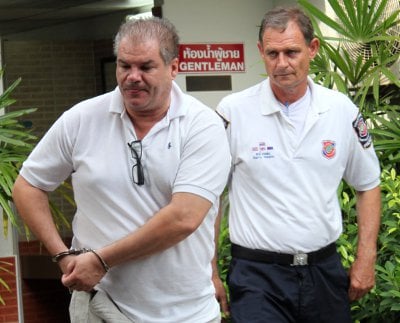 PHUKET: Murder suspect Stein Havard Dokset today re-enacted his actions from nearly three years ago to show Phuket police the sequence of events that led to the death of Rungnapa Suktong.

Arrested on Tuesday after a police raid discovered decaying human remains in a plastic trash can his basement bathroom, Mr Dokset today denied all but one member of the press to enter his luxury home in Kata.

Chalong Police Acting Superintendent Sirisak Wasasiri told the Phuket Gazette, “The suspect confessed that he killed her by accident.”

However, Col Sirisak added that Mr Dokset had been charged with murder.

“He has also been charged with concealing the body and illegal possession of a firearm,” he said.

“According to his confession, I think he did all this alone. He is big and Rungnapa was little more than 150 centimeters tall,” he said.

“He said he sold his properties in Norway to invest with Rungnapa. The house she was killed in and the other properties are registered in her name,” Col Sirisak explained.

Police had yet to confirm the title deeds as genuine as registered with the Phuket Land Office, he added.

Police will continue to gather evidence to present in court, Col Sirisak said.

“But the length of time since Mrs Rungnapa’s death is making it difficult. There are no witnesses and it happened almost three years ago,” he said.

“Also, we are waiting for the report from the Regional Medical Sciences Center in Surat Thani on their tests of the remains. The tests might shed some light on whether she fell down stairs or was murdered,” he said.

“Normally it takes a month for an official report to be returned,” Col Sirisak added.

“I am here on an initial posting for 90 days. We should know by the end of this month whether I will go or stay,” he said.