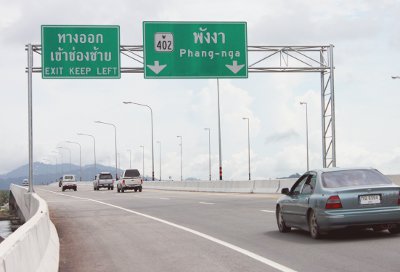 PHUKET: Police at the Tah Chat Chai checkpoint, the only road linking Phuket with the mainland, have confirmed they are not stopping or discouraging any people from Phuket from joining the Pitak Siam mass protest in Bangkok.

The news follows Phang Nga Governor Thamrong Charoenkul saying yesterday that he had received an order from the government to keep an eye on local supporters of the Pitak Siam anti-government protest.

Governor Thamrong told The Nation newspaper that local authorities had attempted to persuade people to not join the Bangkok rally, adding that checkpoints were set up in all districts of the province, immediately north of Phuket.

However, Tah Chat Chai Police Superintendent Weerawat Jantarawijit told the Phuket Gazette this afternoon that he had received no such order.

“I have not received any special orders to stop people from Phuket travelling to Bangkok to join the mass rally,” Col Weerawat said.

“Our officers at the checkpoint are performing their usual duties, such as checking for drugs and weapons, but other than that people are free to pass through as usual,” he said.

Phuket Provincial Police Commander Choti Chavaviwat, the highest-ranking police officer in the province, confirmed that he also had not received any order to restrict the movements of any persons in particular.

“The government did not tell us to persuade or prevent people to not join the protest at the Royal Plaza. We cannot do that. We live under a democratic system, so everyone has the right to have their own beliefs and the right to take part in the government of their country,” he said.

“What our officers can do is just check if any people are carrying any weapons out of Phuket,” he added.

“The government never told us to prevent Phuket people from going up to Bangkok to join the protest. How can we stop them when everyone has equal political rights to participate in democratic processes,” he said.

Phuket Police appeal for help in identifying floating body, possibly that of a foreigner