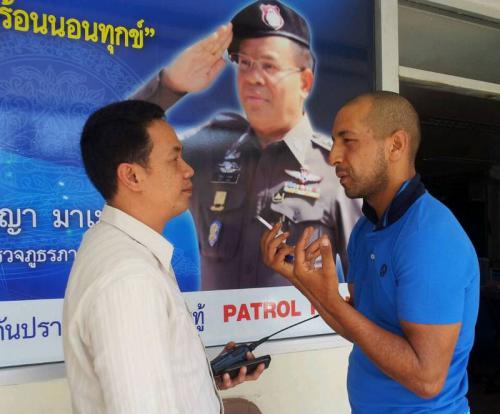 PHUKET: Police arrested a Frenchman for threatening a Phuket convenience store clerk with a pair of scissors in an attempt to get a refund on Saturday.

Riad Lahkim, 37, bought a mobile phone at a 7-eleven on Thursday. Dissatisfied, he took it back to the store two days later – at 4:30am.

“He bought the phone for 1,200 baht and asked for his money back,” said Sunisa Mueanlamai, a clerk at the store.

“I told him I didn’t have the authority to give him a refund, and he would have to wait for the manager to come to work,” said Ms Sunisa.

Picking up a pair of scissors that were for sale, he demanded Ms Sunisa give him the money. She handed over 2,000 baht and Mr Lahkim fled.

The robbery and Mr Lahkim’s departure were captured on CCTV.

By 1pm, Phuket police had located Mr Lahkim at his hotel on Sirirat Road in Patong.

“We took him back to the store to have the employees identify him. Mr Lahkim has confessed to the robbery and been charged for it,” said Maj Suthichai Tianpho of the Patong Police.