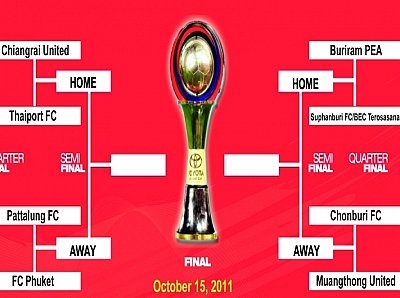 Kick off is scheduled for 6pm.

The purple and white shirted Pattalung “Swiftlets”, also known as the “Swallows”, will be the hosts of tonight’s game at Pattalung Provincial stadium in Pattalung town.

The second leg will be played in one week at Surakul Stadium in Phuket.

Of the tournaments eight quarter-finalists, Phuket and Pattalung are the only two non-Thai Premiere League squads, having both put on impressive campaigns to advance to this stage.

In other first-leg quarter final matches – all to be played simultaneously at 7pm – Chiang Rai Utd will host reigning champs Thai Port FC; Chonburi FC to defend their home pitch against Muang Thong Utd while current TPL league leaders, Buriram PEA will be visited by BEC Tero. However this game has been postponed to tomorrow night, with the start still set for 7pm.

After next week’s second leg game, the advancing southern team will face either the reigning Toyota Cup champs, Thai Port FC or Chiang Rai Utd in the semi finals.

Phuket and Pattalung have met four times since 2009, resulting in two scoreless draws and one win a piece – each of which was achieved by the visiting team.

During the 2009 Division Two season, the two sides met each other twice – first in Pattalung (May 2) , which ended with a goalless result.

The second match that season was played in Phuket (Aug 1) and Phattalung was the victor having scored the only goal of the match.

The two sides Kicked off the 2010 Div Two season last year, clashing on Valentine’s Day at Surakul Stadium in Phuket, though either side failed to score a goal in that love affair.

However, Phuket ended up beating Pattalung two goals to nil in their second season meet in Pattalung on September 5 – the last time the two sides met.

Phuket went on to become the Southern region champions prompting a play off berth which saw the Southern Sea Kirin promoted to national-level Division one league.

Now halfway into the 2011 season, Phuket are in 9th place halfway down the 18-team rankings – snug from the threat of relegation, yet unlikely to be promoted to the premiere league next year.

Down a tier in the Div Two southern region league, Pattalung are currently in third place, narrowly trailing behind Pattani FC and Hat Yai FC for the top spot, and with a slight goal difference advantage over Krabi FC.

Phuket’s and Pattalung’s league ambitions will be set aside for the next two Wednesday evenings, however, as both sides strive for the advantage to advance to the semi finals and perhaps even the finals.