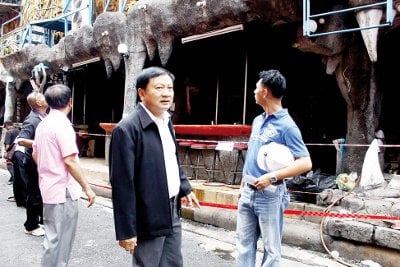 PHUKET: The lack of follow-up on fire safety standards more than a month after the deadly Tiger Discotheque inferno on August 17 that killed four people, has prompted Phuket Governor Tri Augkaradacha to launch a campaign to improve fire safety at large public venues across the island.

Governor Tri told the Phuket Gazette that he had already called on the heads of Phuket’s three District Offices to boost their fire-prevention measures. “I have also asked the District Office chiefs to step up building fire safety inspections in their respective areas,” he added.

However, top of the governor’s list are entertainment venues where large crowds gather.

“I am calling all business operators of large venues in Phuket to come to meetings where we can explain to them what the law requires in terms of fire safety and building regulations. We have started with night entertainment venues first, because the operators of those kinds of businesses seem to not fully understand building safety standards,” Gov Tri said.

“They should be aware that there will be regular inspections. If they fail to meet any of the criteria, we will have no choice but to order them to close until the problem is fixed,” he warned.

Among the “criteria” is a regulation introduced in March this year limiting the amount of light or flammable materials used in building or decorating large venues, such as the foam used in making the original iconic Tiger Disco decor.

Initial reports by fire investigators identified the foam as one of the main contributors to the spread of the deadly fire last month.

Although the operators of Tiger Disco admitted that much of the original decor at the ill-fated nightclub was made from highly flammable foam when the venue was built 10 years ago, they later claimed that much of it was replaced by concrete features in order to comply with the new regulation.

To this, Governor Tri is granting large venue operators 180 days to make all necessary modifications to their buildings in order to meet all building safety requirements.

“We have spoken to some of the entertainment venue business owners in Phuket Town and in Patong, including Tiger Group. Those we have already spoken with have been given 180 days to change or modify their structures.

“We will go back and check every three months after the [180-day] deadline to ensure that they are still complying with the required laws,” he said.

After the key entertainment venues on the island are brought under closer scrutiny, next on the list are shopping malls and convenience stores.

“I am not too worried about them since the safety measures they already have in place are much better than the entertainment venues. They even have their buildings inspected once a year. They seem to follow the law quite well and have good safety precautions, but still, they have to be inspected once a year,” Gov Tri said.

However, he added that government officers who approve building permits for structures that breach fire regulations will also be in the firing line.

“If we find out that the building permit is not right, not only will the building owner be held responsible, but also the person who signed off as approving it,” he told the Gazette.

Governor Tri cited Patong Municipality as an example for being responsible for approving the building permit for the Tiger Discotheque.

“They [Patong Municipality officers] publicly announced that they lost all documents for building permission during a big flood [in 2003]. That still doesn’t answer the question whether or not the building was legally approved to build.

“I will not accept any accusation [that an illegal extension was added to the original Tiger Discotheque structure] unless I can see the paper to prove it. I have appointed one committee from the Provincial Office to investigate Patong Municipality regarding the issue,” he said.