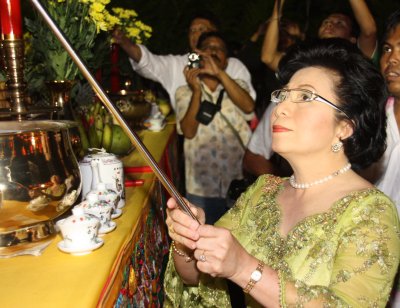 PHUKET: The Chinese Moon Festival will be celebrated in Phuket with three nights of activities at Queen Sirikit Park on Thalang Road in Phuket Town, starting at 7pm on Monday.

The event is organized by Phuket Municipality, the Muang District Culture Committee and the Old Phuket Foundation.

“The Moon Festival is held on the full-moon night of the eighth month of the Chinese Lunar calendar. The festival is being held to exhibit the beautiful culture of the people of Phuket and [to] promote tourism,” she said.

The event will feature handicraft demonstrations, local cuisine and staged song and dance performances from every tambon in Muang District.

At midnight on September 22, there will be a moon-worship ceremony, with Chinese monks chanting for prosperity and peace.

“Many years ago, every family in Phuket celebrated this festival by setting out offerings on tables inside their homes,” Mayor Somjai said.

As the tradition seemed to be disappearing, the municipality has decided to promote it as a way of passing it on to the next generation, she said.

“We would like to ask everyone to come and join us and make a wish for the country’s peace and prosperity,” she said.

The Moon Festival is also held to honor Guanyin, the bodhisattva of compassion.

On the day it takes place, the moon is believed to be brighter than on any other day of the year.

The festival is also known as the Festival of Harmony because it brings family members together.