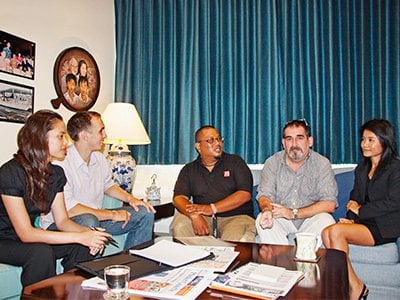 PHUKET: The Phuket Gazette and the Phuket Bulletin, operators of mega-station Blue Wave 90.5 FM, have entered into a partnership to carry Gazette content throughout the Andaman region, with Phuket, Krabi and Phang-nga at its epicenter.

Blue Wave was established in 2006 and is the Andaman’s largest English-language broadcaster. All programming is in stereo and the station has become well known for its particular genre of music – cool, easy and sophisticated.

It is this, according to station manager and program director Oscar Chitamitre, that has enabled the station to penetrate through and well beyond the ‘expat community’, and into the larger and faster-growing world of ‘international Thais’.

“One of the reasons we’ve partnered with the Gazette is that we share the same view of the market. Phuket is in fact a market of many communities and we try to appeal to a general audience – not to any particular or exclusive group. This gives us a much broader base of listeners.

“Our focus is to entertain and inform people who live in the Andaman region, not just on Phuket Island. Our brand is easy for anyone to listen to and is understood, recognized, and enjoyed by both Thai and foreign listeners.”

“I am myself what many foreigners speak of as an ‘international Thai’. I love foreign travel, worked in New Zealand in my twenties, and enjoy mingling with people from all over the world. My husband is Swiss and my kids are luk kreung. And, yes – Blue Wave has long been my favorite radio station,” she says.

Among Phuket’s ‘Big Eight’, mainstream radio stations, Blue Wave 90.5 FM is the only one broadcasting in English.

The island also has about 30 smaller stations registered with ‘community’ licenses, of which two or three broadcast in English.

Will the tie-up with the Gazette mean a lot more talk on Blue Wave?

No, says Oscar. “But it will mean more local news and certainly more coverage of events.”

For the Gazette, founded in 1993, the radio partnership means an important new vehicle for community information and enhanced options for advertisers.

“The only thing we’ve not had until now was access to big radio, says Gazette General Manager Natthira (‘Anna’) Susangrat.

“Advertising values are all about ‘reach’. We have that with the newspaper, by far Phuket’s largest with a national circulation of 35,000 copies through our partner The Nation.

We have the only Phuket newspaper ‘reach’ on airlines, having been aboard Dragonair from Hong Kong for close to a decade now, to which we added earlier this year all flights of all ten major airlines flying into Thailand (Bangkok and Phuket) from overseas.

“We also have Phuket’s biggest reach in television where our partnership with Nation Broadcasting has favored PGTV with six prime-time, half-hour shows every week on UBC/True Visions. Those shows start with Phuket Lifestyle on November 5 and Phuket Talk on November 6,” Ms Nathira says.

“And we have it on the Web where Google gives us the highest page popularity ranking accorded any site in or about Phuket.

“Finally, now, we’ve rounded it all out with radio by giving advertisers the biggest reach in the Andaman, and listeners a well balanced offering of music and information,” she concludes.

Please, Sir, can I have a trial?