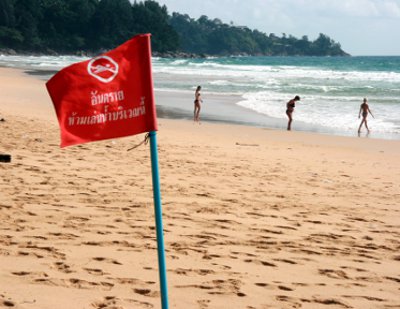 PHUKET: Marine Police are still searching for the body of Russian tourist who disappeared in rough surf at a Phuket Beach on Monday afternoon and is now presumed dead.

Alexey Agaponov disappeared off Nai Thon Beach the same day the Russian Embassy in Bangkok confirmed that a 50-year-old Russian had drowned at Surin Beach, further south down the Phuket coastline.

“The waves are too strong and we cannot dive to search for the body,” said Lt Jirayuth Onthong, who is charge of the search operation at Nai Thon.

Mr Agaponov, 28, went swimming with his wife and another couple around midday.

“We warned them that it was dangerous to swim around that time and they said they understood,” said Surasak Bumroongrak, chief of the lifeguard contingent assigned to the beach.

“First, they swam near our lifeguard station, but about an hour later they started getting into trouble. The two ladies were safe because they were close to the beach, but the men were further out playing in the waves,” he said.

Mr Agaponov’s male friend, who asked not to be named, was rescued by a tourist, Mr Surasak added.

One of the restaurant operators on the beach who saw the incident told the Gazette, “The sea was very rough that day.”

Mr Agaponov was missing for about two hours before witnesses on the beach said they saw him floating near the rocks at the north end of the bay.

Whether or not Mr Agaponov was still alive at that time the witnesses could not confirm.

Sen Sgt Maj Prapan Chartpradone, of the Marine Police search party, explained that the search is being hampered by strong waves.

Mr Agaponov’s body might be trapped by the rocks.

“We went looking along the shore this morning and questioned locals whether they had seen anything. So far, we have heard nothing,” he said.