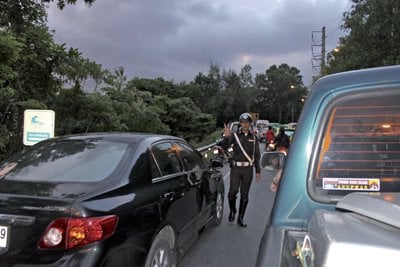 PHUKET: The “tsunami” scare has come and gone, and I’m still livid. Many news organizations spread enormous layers of misinformation and scared the living daylights out of people worldwide, without the slightest regard for the facts.

All they cared about was selling more newspapers or gathering more clicks.

At 5:23pm on April 11 – an hour before the “tsunami” was scheduled to roll out on our shores – one of the largest newspapers in Bangkok sent out an SMS saying, “Waters receding clearly on certain beaches on Phuket.” That was news to me. I was on Phuket, watching Patong Bay, and there wasn’t a drop receding anywhere. I guess they didn’t bother to check with anyone who’s ever seen a Phuket low tide.

Oh well. I’ll save my rant about irresponsible journalism and execrable reporting by people who should know better for the end of this article.

As you undoubtedly know, there was an earthquake – a big one – off the coast of Sumatra at 3:39pm (08:39 UTC) on April 11. We felt the quake in Phuket. There was a panic at Central Festival, with half the people in the mall running quickly to their cars and causing big traffic jams. There was another panic at Jungceylon, with people running to the exits.

I was raised in Southern California, so when I felt the quake, I shrugged and figured nobody would even notice as it’s pretty standard fare for a Californian.

By all accounts, the Patong warning system worked. Sirens on the beach blared – although visitors didn’t know exactly what to make of it at first – and all of the hotels evacuated their guests.

People in Patong took every available conveyance and headed for the top of Patong Hill (probably not realizing that tsunami waves don’t rise to 300 meters). The more prudent walked up nearby hillsides. I just happen to live on one of the hillsides, on the north end of Patong Bay, maybe 20 meters above sea level and we had about a hundred visitors.

At 3:40pm, the National Earthquake Information Center in Colorado had early details posted about the quake. They pegged it at 8.9 on the Richter scale, but later lowered it to 8.6.

At 3:45pm, the Pacific Tsunami Warning Center (PTWC) posted a detailed report on its website, and issued a Tsunami Watch (not a Warning – a Watch; there’s a big difference!) for areas as far away as South Africa and Yemen.

Remarkably, the PTWC calculated estimated arrival times for tsunami waves at almost a hundred ports: locations in Indonesia came first, with arrivals starting at 4:31pm (our time) in Banda Aceh; 4:37pm on the Nicobar Islands; 5:45pm on the Cocos Islands, and 6:18pm in Phuket.

Yes, that means all 600 people in Australia’s Cocos Islands would’ve been drenched a half hour before the big kahuna hit us. Except it never did.

By 4:30pm, as best I can tell, most of the voice telephone circuits in Phuket were jammed. SMSs got through for a while, then they stopped too. But the internet kept working. ADSL, Fiber, 3G – all of the lines I tested were running – and the internet provided the only reliable news I could get.

What about television? Funny you should ask. The international networks were just as clueless this time around as they were during the 2004 tsunami, with talking heads rattling on, trying to fill the air with news of any description, with no connections at all to the affected areas.

Thai TV was even worse, according to an excellent report at asiancorrespondent.com. There were no reports on local TV throughout the afternoon, except for text crawls at the bottom of the screen. ThaiPBS was the first to run a live news story at 5:42pm, followed by the other major stations at 6pm.

So where did the real news come from? People on the ground, of course, using the tools we now have to report on events as they happen. There were many Facebook updates, but once again Twitter showed its mettle, as the primary source of reliable news on the tsunami, as it happened.

Of course, it must be said that there were some fear mongers and idiots tweeting, as well. The trick lies in picking sources you trust. In my case, I found solid information from @tulsathit (who reports for The Nation), @JamieMonk (who blogs about Phuket, and, yes, our own @PhuketGazette.

I also participated (@PhuketLiveWire), primarily to debunk the people who were saying that a tsunami was imminent (we would’ve heard about it an hour earlier from survivors in India and Indonesia – or two hours earlier from the early warning systems in Indonesia), that the water in Patong Bay was receding (gimme a break – we were at low tide), and to counter those who said they “observed” a small tsunami wave (more about that later in this article).

If you aren’t on Twitter yet, you should be. There’s no better source of news anywhere in the world, and considering the quality of coverage of Thailand in the international press, it’s really the only way to stay on top of breaking news – like a tsunami.

Go to twitter.com and sign up. Add a few sources like the ones I mentioned, and just go back to the Twitter site from time to time. You’ll catch on.

If you find yourself using Twitter a lot, try using one of the programs that helps you work with Twitter, such as Tweetdeck or MetroTwit. You can put Twitter on your PC, Mac, iPad, or phone – it works with just about anything and it’s 100% free, all the time.

In the end, five people reportedly died from heart attacks, there was “little damage” (according to Reuters) and absolutely no tsunami, anywhere, least of all in Phuket. According to the Washington Post,”aside from cracks in the walls of houses in Banda Aceh and structural damage to one bridge, you would hardly know that anything happened.”

To be sure, it’s better to be safe than sorry. The evacuation went well, and should provide lessons for future emergency measures. The only thing that was lacking – distressingly – is the abysmal state of telephone communication. There were horrified people waiting very near my house. One distraught lady had left her family down in Panwa, to go shopping in Patong, and had no way to contact them.

Another group – I’ll never forget them – didn’t speak any English, only Russian, and they were scared out of their wits that another huge tsunami was on the way. It took a while for me to understand, but they were mostly concerned about their families back in Russia. The families must’ve been horrified, and this group had no way to contact them.

Which leads me to my rant. People have been emailing me links to photos and videos that claim to capture a “real” tsunami wave in Phuket. I’ve looked and looked, and just don’t get it. The photos and videos are of regular, simple, very small waves. One of the pictures claims it shows water being sucked out of Patong Bay. Balderdash: on the evening of April 11 we had a low tide, and Patong Bay always looks like that at low tide.

The one that really gets me: somebody claims they saw a 50 cm tidal wave! We get 50 cm waves in Patong all the time, but on the afternoon and evening of April 11, the seas were calm. I was there.

Besides, tidal waves don’t look or act like regular waves. At least based on what I saw in Patong on Boxing Day 2004, tidal waves ride on the surface, and they come at a cross-angle from normal waves. They don’t gently lap up and run back out like regular waves. The folks who reported tsunami waves may be well-intentioned, but they’re completely wrong. There weren’t any tsunami waves anywhere in the world,