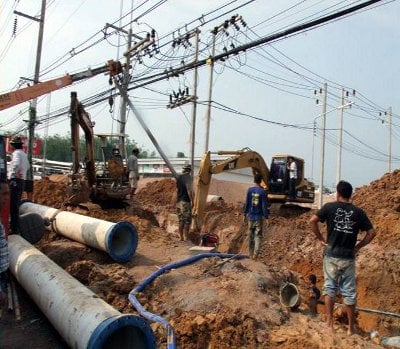 PHUKET: The Phuket Waterworks Authority has revealed a plan to provide public water fountains throughout Mai Khao as a pilot project in rolling out potable water supply to the northern parts of the island.

Pichai Wetchrungsri, Deputy Director of the Phuket Waterworks Authority, announced the news earlier this month at a meeting at Provincial Hall, where he explained that the plan was inspired by the drinking fountain at Loma Park in Patong.

“This year we plan to provide clean drinking water to the central and northern parts of the island,” Mr Pichai said.

He explained to the Phuket Gazette that the project will focus first on providing public water fountains in Mai Khao, as the northern end of the island is considered the “Gateway to Phuket”.

“However, we have yet to decide on where to establish the supply point for the central parts of the island,” he added.

Mr Pichai said the water would be purified and then delivered to the drinking fountains through new polyester pipes that his office has been installing across Mai Khao for the past eight years, replacing the old PVC water mains.

“In the past we used PVC pipes, which were joined together with PVC glue. This glue sometimes did not provide a tight seal, so water occasionally would be contaminated,” Mr Pichai explained.

The new polyester pipes are joined by much tighter-fitting seals, greatly reducing the risk of the water being contaminated, he added.

The new pipes are being used in the 40-million-baht extension of local government water mains from Baan Pon, just south of Thalang Town, to Baan Mak Prok School, located near the eastern end of the runway at Phuket Airport.

The project will allow local communities in the north of Phuket to start hooking up their local water networks to the mains and using government water supply in their homes in Srisoonthorn, Thepkrasattri and Mai Khao subdistricts.

Connecting with the local water mains network from the Ban Jo water treatment plant – which is currently under construction to treat water from the Bang Neaw Dum reservoir – the new pipes are being laid alongside the southbound lane of Thepkrasattri Road from the 16km road marker to the 30km marker.

Pornthep Bunyapaluek, an engineer at the Phuket office of the Royal Irrigation Project, said the project is aimed at resolving recurring water shortages suffered by residents in the north.

Mr Pichai maintains that the government water supply is safe to drink – in some areas.

“We have been replacing the water mains pipes since 1998. So those areas being supplied by water treated at the government water treatment plants and delivered by the new pipes have safe drinking water,” he said.

“The Bang Niew Dum reservoir will supply water for the north of the island, especially during the construction of the Phuket International Convention and Exhibition Center,” Mr Pichai said.

BUT IS IT SAFE TO DRINK?

The heads of the two major waterworks agencies in Phuket say their water is safe to drink after it leaves the treatment plant and arrives at your tap, but some experts warn otherwise.

Brad Kenny, an environmental engineer and managing director of Environmental Solutions & Protection company on the bypass road, previously told the Gazette in a special report that he believes water from the plants meets international drinking-water standards.

However, he expressed concern about tap water becoming contaminated between the treatment plant and the tap.

“Once water leaves the water treatment plant, here in Phuket or in your home country, no one has total control over all of the places that it could become re-contaminated: the water mains, the plumbing… and most of all, your own water storage tank.

“The best way to ensure that the water at your home is drinking quality is to be sure your own supply pipes are in good order and of good quality, along with quarterly cleaning and disinfecting of any water storage tanks you have,” he advised.