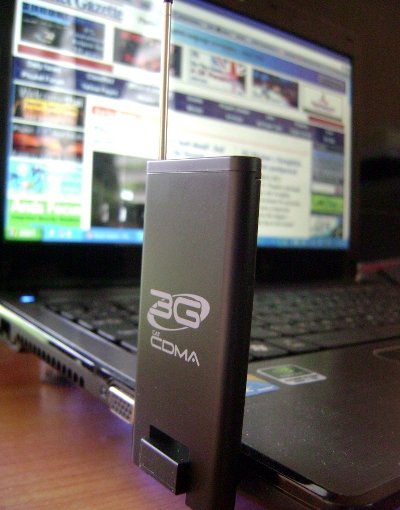 The raw data is posted on PhuketInternetSpeed.com.

I’ve heard of problems with CAT’s CDMA/EV-DO network in Kamala for years. People who try to connect from different parts of Kamala get very different speeds, depending on where they’re located.

In general, CAT wireless international speeds vary greatly depending on where you’re sitting in Phuket: Some people can get 2 Mbps – fast enough to view YouTube videos, for example.

Others rarely get more than 0.5 Mbps, which can be painfully slow for anything but the most rudimentary email.

RT’s data, though, tells us something more. It shows that CAT isn’t keeping up with demand.

Early in the morning, RT’s CAT network downloads are usable, but not particularly good: 1 Mbps is fast enough for reasonably fast web surfing, playing music directly from the Internet, or running Skype. It isn’t fast enough to play videos without considerable jerks, even at low resolution.

As the day wears on, though, the network’s download speed slows way down. By mid-morning it’s less than half as fast. In the afternoon it’s one-fifth as fast as early morning.

At that point, CAT’s fancy CDMA EV-DO isn’t considerably better than old-fashioned EDGE speeds – the kind of speed you can get by hooking up almost any mobile phone to your computer.

Contrast that with the upload speed. RT’s international uploads are faster than many land-line uploads, almost all day long – they don’t’ vary much during the day. That means he’s getting consistent results. His antenna isn’t moving much, the network isn’t fading in and out: all is well with the network itself. But even though the network’s fine, his download speeds continue to drop as the day wears on.

The only possible conclusion is that the signal is fine throughout the day, but download speeds crater, no doubt because of contention – the cumulative effect of many users trying to download through the same data straw at the same time.

CAT’s network is reasonably good, but there isn’t enough capacity for the demand put on it by all of its customers during the day. That’s what the graph proves.

As I explained in Live Wire online three weeks ago, CAT ran out of EV-DO wireless Internet cards. At least, CAT weren’t selling them. If you asked at the CAT office, they said, “We’ll have them next week.” They told me that for months. CAT recently advised that it has the EV-DO modem, the EC-150, back in stock. Be sure to check the Speed Reporting site to see how well their service is doing in your area before you buy a card.

Clearly, CAT doesn’t have the hardware to keep up with demand, at least in Kamala. But there are other forces at play, which may render the entire CAT CDMA/EV-DO network obsolete in the next few months.

It’s complicated, but CAT has announced its intention to roll out a network-based technology that’s much faster than the current CDMA/EV-DO network.

To understand what’s going on, you have to wade through some technical terminology. For that I apologize: the acronyms don’t make any sense, and the marketeers are taking great liberties with the term “3G” in an effort to separate you from your hard-earned baht.

I’ll go into details about the technology in a future column, but for this week suffice it to say that CAT has announced it’s going to stop working on its current CDMA/EV-DO network and start building an HSPA network.

Last week, CAT said it was accelerating its roll-out of HSPA and hoped to have the network installed nationwide by the end of the year, with thousands of base stations all over the country.

At the same time, CAT announced that it was going to call its new HSPA network “3G+”.

That’s an interesting bit of marketing sleight-of-hand, necessitated by the fact that CAT is calling its older CDMA/EV-DO network “3G”.

Sorry folks, but as I’ve been saying at the Computer Clinics for more than a year, CDMA/EV-DO isn’t 3G – not to my way of thinking, anyway. You can call a zircon a diamond, if you want, but that doesn’t make it sparkle.

Of course, we’re talking about Thailand and “3G” and big bucks – so there are plenty of regulatory hurdles, lawsuits and questionable practices inherent in the roll-out, but if CAT proceeds in the direction it has announced, we’ll have a whole lotta HSPA this year – and the future of EV-DO is precarious at best.

Will CAT offer to swap out its current gear and upgrade loyal EV-DO customers to HSPA?

Will CAT continue to offer unlimited access for 800 baht per month?

Both are good questions, and we have yet to hear any answers.

Maybe it’ll all be swept away in the confusion that’s attended every other significant 3G roll-out in Thailand. Right now it’s difficult to say.

Able Wanamakok’s second Facebook 101 seminar is fully booked. Facebook 101, you may recall, takes attendees through the basics, from setting up a business (or organization or charity) page, designing it, drawing attention to it, and then using the page to reach out to Facebook users.

Johan Lofgren helps with the more technical parts. You don’t need any experience with Facebook to attend these free seminars.

Able’s planning a series of seminars in Thai, starting May 28. Email her for details at: able@awpr-phuket.com

The next Phuket Computer Clinic meeting will be on Sunday, April 17, from 10am to midday at the Sandwich Shoppe Chalong, one kilometer north of Chalong Circle on Chao Fa East, in the Fisherman’s Way Business Center.

As always, the clinics are free, and open to anyone interested in (or bothered by) computers in Phuket. There’s a lengthy question and answer period, and lots of help from kindred souls: if you have a question about computers in Phuket – or PCs in general – drop by and we’ll get you some world-class answers.

Songkran takes to the sky over Phuket