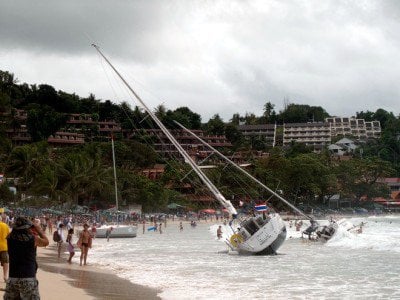 PHUKET: As the sun sets on the last day of 24th Phuket King’s Cup Regatta, at least four yachts remain stranded on Kata Beach after a day of relentless hammering by strong waves.

More than 10 boats were beached this morning by strong winds and big waves that Regatta Director Simon James described as “abnormal”.

A spokesman for the regatta said that “James and his team have been on the beach since 2am and are not likely to see an end to the drama until much later today.”

All race committee personnel were instructed to assist in the rescue of the boats heading for shore. Unfortunately, those boats already on the beach will now have to wait for high tide before they can be refloated.

“Three King’s Cup series winners, Miss Saigon, Ichi Ban and Team Sea Bees, suffered damage in the early hours of this morning, with all of them ending up on Kata Beach, literally, after breaking their moorings.

“[Skipper] David Liddell believes Miss Saigon‘s mooring was hit by an out-of-control yacht [and had its] line cut,” according to the regatta’s media center.

“The tide has come up and is now on the ebb. Owners expect to reverse the process and refloat the boats when conditions have calmed down… maybe tomorrow,” he said.

Ichi Ban’s problems began yesterday as the boat dragged anchor and almost ended up on the beach.

Quick work from crews on other boats helped saved the yacht from major damage, but since being forced aground again this morning Ichi Ban may not be so lucky in avoiding damage to her hull and keel.

Thai Inflation: Phuket may be at the forefront next year