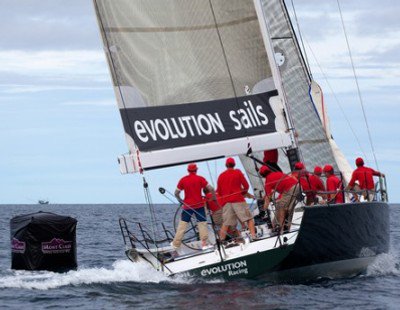 PHUKET: Only 0.49 of a second on corrected time separated Neil Pryde’s HiFi and Ray Roberts’ Evolution Racing in race one today at the Phuket King’s Cup Regatta.

But all eyes were on Evolution Racing, which tacked away from HiFi at the bottom mark. HiFi covered them down the last downwind leg and the real race was on.

Evolution brought with them a fresh gust all the way down the course, while HiFi pushed for the line.

HiFi crossed 11 seconds ahead, but both yachts recorded a corrected time of 2:10:24 rounded up – and both boats were awarded a first-place point.

In the second windward-leeward race HiFi was powered up at the start with Team Premier and Jelik III on their stern.

Evolution Racing chose the boat end of the start line and began the race in their own clear breeze.

Yet this race belonged to HiFi. Asked about wind shifts at the end of racing, a very tired Neil Pryde, laughed: “There were plenty. It was a very tough race the last one, very shifty. We actually had a good race. We were in front all the way.

HiFi mainsail trimmer Tony Rae said: “The second race we were sailing the race relatively on our own. It was so shifty and bumpy that we made quite a few good gains upwind.

“It was just a matter of staying in the pressure that was around and work with what we had and not try to cover other boats a little bit. Some of them came in down the run.”

After seven races and one discard, Evolution Racing is first overall in the class on eight points, HiFi is second on 11 points and Jelik III is third on 24 points.

His nearest rival is Peter Wintle’s Koull Baby on 20 points followed by Ben Copley’s Katsu, with just one race left on the schedule.

IRC2 class will go down to the wire this year as CPO Wiwat Poonpat’s Royal Thai Navy 1 and Jamie Watts’ Team Sea Bees both have nine points with two races left on the programme.

Royal Thai Navy 1 lead the class, but only by “countback” – they have won three races compared with Team Sea Beas winning two.

Hans Rahmann’s Voodoo continues to dominate the Firefly 850s class. His crew have won their all races, except one – in which they placed third.

John Newnham on Twin Sharks is second overall in the class with 15 points – nine points behind Voodoo.

David Liddell’s Miss Saigon slipped into the lead in the Multihull class, and is just one point ahead of Andy Pape on Da Vinci, which has 11 points.

Henry Kaye’s Thor returned to form, winning the first race and placing second in the second race today to move into third place overall in the class with 13 points.

Tomorrow is the lay day of the regatta, with the racing continuing on Friday.

For full provisional results of the regatta so far, click here.