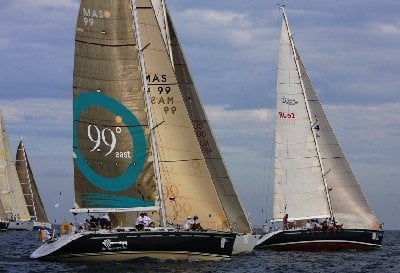 PHUKET: Neil Pryde’s Hi Fi is leading the way in the Premier Class after the second day of racing at the 2009 Phuket King’s Cup Regatta.

Matt Allen’s Ichi Ban looks set to run away with the IRC1 class after securing a fourth consecutive victory.

In the IRC 2 class, Peter Dyer’s Team Bentley moved into pole position, finishing almost 10 minutes ahead of Stuart Williamson’s Skandia Endeavour of Whitby once the times had been adjusted.

A combination of light wind and a longer race course meant that only four boats in the Bare Boat Charter class actually finished the race, with Mike Crisp’s Venture the eventual winner.

Brent Gribble’s Twin Sharks won the Firefly 850 race and Henry Kaye and Fergus Wilmer’s Thor won in the Multihull Class to give both boats a commanding lead in their respective divisions.

The extravagantly named Baby Tonga-Hideaways Club won in the Premier Class to make it two wins out of two.

Speaking after the race, crew member Mike Lamb said: “We’ve probably got the longest name out of any of the boats in the regatta, but without the support of the Hideaway Club, we wouldn’t be here. There were very light winds today, but we are delighted to have won two races out of two, and we are hoping we can go on and win this regatta.”