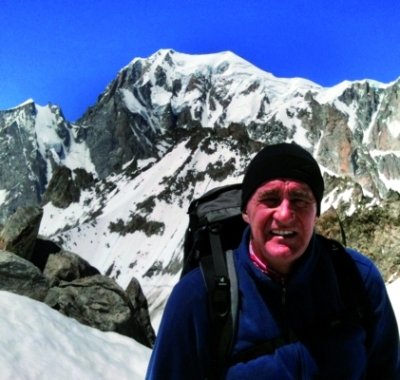 PHUKET: Friends and family of a Phuket Ironman athlete currently climbing Europe’s highest peak will be praying for his safe return after hearing that two climbers fell to their deaths in the same area earlier this week.

Cherng Talay resident Les Bird, 59, is attempting to reach the 4,810-meter summit of Mont Blanc in the French-Italian Alps.

He is climbing to raise money for children under the care of the Child Watch Phuket Foundation.

British-born Mr Bird has been in contact with the Gazette via SMS messages from the mountainside and by email from his base camp in the Chamonix Valley.

He is climbing with fellow Briton and former SAS soldier Harry Taylor.

The pair have been altitude training on the treacherous slopes of Mont Blanc for the past week in preparation for their summit attempt, which began yesterday.

On Tuesday, Les wrote: “Just back down after 28 hours on Mont Blanc. Four hours sleep last night. I am exhausted, but safe.”

The next day’s message was more chilling: “British climbers killed on Mont Blanc. Not me.”

“We found out about their deaths when we walked into the memorial ceremony directly under the Giant’s Tooth ridge, high up on the mountain. Very sad,” Les wrote.

Unbeknown to Les and Harry, news of the deaths had already reached the British media.

The victims, a 38-year-old man and 20-year-old woman, fell over 300 feet to their deaths while climbing near where Les and Harry had seen them earlier the same day.

“We met those two climbers in a halfway hut on the mountain during our climb,” Les wrote.

“I only said ‘good morning’ to them, as we were in a hurry.”

Police in the nearby town of Chamonix said the couple – who have not yet been named – both died instantly.

Each year the mountain claims the lives of at least a dozen climbers.

But Les, with only three years’ climbing experience gained 40 years ago, wrote that he was still determined to reach the top in a final ascent and return to the base camp within three days.

Les and Harry were due to reach the summit early in the morning, local time.

If all goes according to schedule they will plant the Thai flag at the top, then make the two-day decent, camping out one night on the way back to base camp.

Their climb could be hampered by thunderstorms forecast in the area today and tomorrow.

“I’ll write as soon as I’m back down,” Les wrote in his last text message before setting out.

Those wishing to help Ironman Les reach his one-million-baht goal for Child Watch Phuket can do so by donating to the following account: