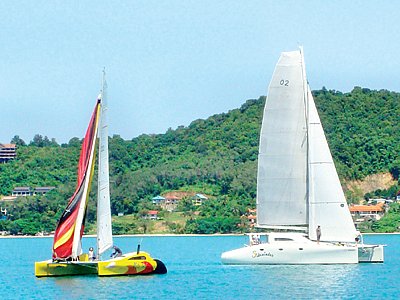 PHUKET: What initially looked like a small crowd turned into a fleet of seven for the Irish Times Series race five off Ao Chalong Yacht Club.

Participating in the Racing Class were Linda, Dreamtime and Remington, while in the Multihull Class were Nina, Moto Inzi, Miss Saigon and Sidewinder.

A sunny day greeted the crews with a good breeze beginning to develop.

It was an uneventful start considering the mix of multihulls and monohulls with varying characteristics.

Sidewinder won the start and led the fleet to the Banit Safe Water Mark and onwards to the yellow buoy off the Rawai Mosque.

Wind shifts and easing conditions made the course quite a struggle with no exceptions. Confusion reigned in the middle of the race with Moto Inzi and Sidewinder not following the buoy rounding instructions.

With the need for both Cats to re-round the mark correctly and re-pass the gate, Miss Saigon gained ground and beat them both through the gate. Nina struggled at the back of the fleet in winds that didn’t favor her weight and sail area. Nina is the only multihull to have competed in every race of this series so far, as well as all of the previous series.

In the Racing Class, Remington finished ahead of Dreamtime with Linda placing third.