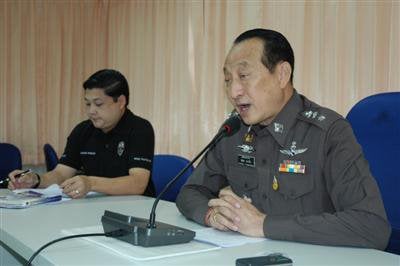 PHUKET CITY: Phuket Immigration this morning held a press conference to announce measures aimed at improving compliance with immigration law, including the requirement that owners of all hotels, guesthouses and rental homes report foreigners on their premises to immigration within 24 hours of arrival.

Phuket Immigration Superintendent Chanatpol Yongbunjerd told the press that the crackdown follows the recent arrest of three ethnic Rohingyas on charges of involvement in an international human smuggling ring.

The three men, two of whom were arrested in Songkhla’s Haad Yai district, are also suspected of having links to terrorist groups including Jemaah Islamiyah (JI).

The crackdown is also part of stepped-up security in the run-up to the 42nd Asean Foreign Ministers Meeting, scheduled to take place at Laguna Phuket from July 16 to 23, Col Chanatpol said.

Expected to attend that event are Foreign Ministers from all 10 Asean states as well as their counterparts from dialogue partners Australia, Japan, New Zealand, the European Union, the United States, China, India, South Korea and Russia.

US Secretary of State Hillary Clinton is scheduled to attend the meeting, during which the ministers are expected to try and hammer out a unified approach to the nuclear ambitions of pariah state North Korea – which successfully carried out a nuclear test in May.

Col Chanatpol used the press conference to ask for co-operation from hotel owners as well as employers of low-wage foreign laborers, who must report the details of all foreigners under their employ as soon as possible – or face fines.

Other security measures will include: more thorough screening of foreigners entering and leaving the country, especially those on watch lists or exhibiting suspicious behavior; increased co-operation with local police departments in monitoring residences with foreigners in domicile, especially those with suspicious behavior; increased security in popular tourism and nightlife entertainment areas; and better co-ordination and information exchange among police and related agencies.

Col Chanatpol also asked the public to report any problems or useful information to Phuket Immigration on 076-212108.

Phuket Immigration Inspector for Investigation Suparerk Pankosol, who also attended the meeting, told the press that homeowners who fail to inform Immigration of foreigners staying in their homes – either as guests or under rental agreements – face fines not exceeding 2,000 baht.

Owners of hotels, guesthouses and other commercial accommodation establishments who fail to report guests are subject to fines ranging from 2,000 baht to 10,000 baht, he said.

Phuket Immigration’s webmaster, Bunta Lapet, told the media that such registration could be conducted quickly and easily on line by using the site’s “Phuket Immigration Enterprise” webpage.

Pregnant woman gunned down in Krabi