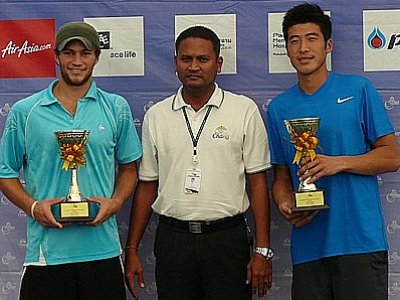 PHUKET: Partnering each other for the first time in doubles competition, Kelsey Stevenson from Canada and Zhe Li from China earned an unexpected but well deserved victory in the Chang ITF Thailand Pro Circuit Men’s tennis doubles final.

Having defeated the tournament’s number three seeds, Soong-Jae Cho and Ji Sung Nam, both from Korea, Stevenson and Li faced the number one seeded Thai duo of Weerapat Doakmaiklee and Kirati Siributwong for the title.

The strategies of both teams were clear from the first serve. Li and Stevenson went on the offensive, attacking the net at every opportunity, while Doakmaiklee and Siributwong seemed intent on playing rasping drives from the baseline.

But it was the attacking momentum that gained dividends. With the set tied at 3-3, Stevenson and Li harried the Thai pair with even greater zeal and eventually took the first set 6-4.

A final tie-break was needed, but Stevenson and Li did not need another bite at the cherry and swiftly took a 7-2 lead. This time it was Doakmaiklee and Siributwong who had no answer to the devastating volleys and went down 10-3.

“We were very nervous going into the final as this was our first time as a doubles team,Stevenson told the Phuket Gazette.

“We both felt we should have won the second set as well, but our competition was strong. It was a good game, Li explained.

The Men’s singles final, between Frenchman Laurent Rochette and Jimmy Wang of Chinese Taipei, will take place tomorrow morning at 10am at the Thanyapura Sports and Leisure Club.

The Phuket Gazette and PGTV are sponsors of this week-long ITF event.

Phuket officials push for buses from airport to main beaches