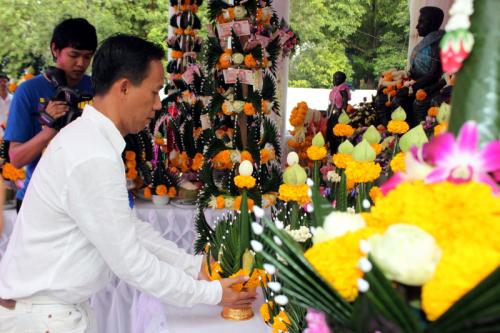 PHUKET: Phuket Governor Maitri Inthusut tonight will play a leading role as King Buddha Yodfa Chulaloke, also referred to by Thais as “Rama I”, in the annual re-enactment of the Battle of Thalang.

The event marks the historical battle in 1785 in which Phuket’s own “angels”, Thao Thepkrasattri and Thao Srisoonthorn, better known as the Phuket Heroines, led local villagers to repel a Burmese invasion.

Governor Maitri began today’s celebrations with a wreath-laying ceremony at the Heroines’ Monument in the heart of the island.

Joining the governor were many government officers and representatives from businesses across the island.

“Phuket is a beautiful province. It has many amazing natural tourist attractions, and a long history of culture and traditions,” Vice Governor Somkiet Sangkaosuttirak said.

“This ceremony is held to pay homage to and remember the invaluable contribution of Thao Thepkrasattri and Thao Srisoonthon in protecting Thalang from the Burmese army,” he added.

Observing tradition, Governor Maitri yesterday led a ceremony in the main prayer hall at Wat Muang Komarapat during which leading Phuket figures and local residents made offerings to a shrine dedicated to Phuket’s two heroines.

At the annual ceremony, worshipers paid respect and wished for luck before tonight’s re-enactment of the famous victory, which is marked on March 13 on the Thai historical calendar.

Tonight’s re-enactment of the historic battle will be held at Thalang Victory Memorial Field, with proceedings to be held from 8:30pm to 11pm.