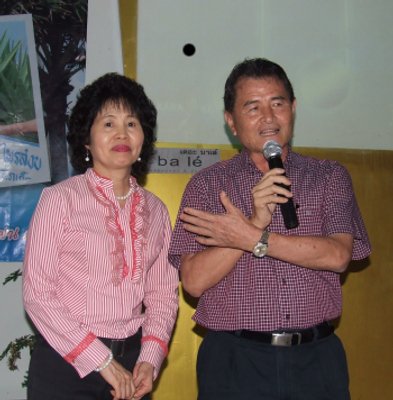 PHUKET: Governor Wichai Phraisa-ngop last night called for his successor to continue the fight to complete the Klong Koh Pee road project, which looks set to move forward following a new measure issued by the Ministry of Natural Resources and Environment (MNRE) specifically for Phuket.

Governor Wichai made the comment during a speech at a farewell press party last night, organized for him by the Phuket Reporters’ Club at The Balé karaoke club on Phuket Road.

During the party, also attended by his wife Mrs Thaisika, Gov Wichai handed over 20,000 baht in cash as a parting gift to the Reporters’ Club. A much larger farewell party will take place tonight at the Governor’s Mansion starting at 6pm.

Local government officers and members of the local the media will accompany Gov Wichai and his wife when his departing bus leaves for his native Nakhon Pathom province early tomorrow.

Gov Wichai, who officially steps down at the end of this month, will be replaced by Vice Governor Tri Augkaradacha, it was announced by the Ministry of Interior earlier today.

Another of his current deputies, Teerayut Eimtrakul, will be promoted to full governor of Surat Thani.

The governor’s presence at the party last night came at the expense of his attendance at the Queen’s Birthday dinner at The Blue Elephant held by the British Embassy to celebrate the birthdays of British monarchs past and present.

In his 20-minute speech, Gov Wichai thanked the Reporters’ Club for holding the party. Yet, he said he would have preferred to stay on as governor long enough to see the Klong Koh Pee Road project through to completion.

The road, planned over a decade ago, would greatly reduce commuting time between much of the island and Sapahn Hin, which is home to several large schools and many government offices.

Despite the governor’s lobbying efforts in Bangkok and substantial support by local and national-level politicians, the project remains on hold following the rejection of the latest draft of its Environmental Impact Assessment.

The key sticking point has always been the need to use a 600-meter stretch of protected mangrove forest to complete the road.

In the latest development, Deputy Prime Minister Sanan Kajornprasart told a public hearing at the Chalermprakiat School at Saphan Hin on Friday that he was “99.99%” sure the project would be approved now that the Ministry of Natural Resources and Environment (MNRE) had issued a new measure on July 30.

Issued expressly to allow the Klong Koh Pee Road project to move forward, the notification stipulates that any such project must first have Cabinet approval.

At the standing-room-only hearing, Phuket City Mayor Somjai Suwansupapana presented the city’s latest project design, which includes a flyover to minimize the impact on the mangroves and natural drainage in the area.

The flyover would cost 180 million baht, six times the amount put forward for the project under the previous plan championed by Gov Wichai.

DPM Sanan, who conducted an aerial inspection of the area before the hearing, described the mangroves in the area as “degraded” and said the new measure virtually guaranteed the project will now go through.