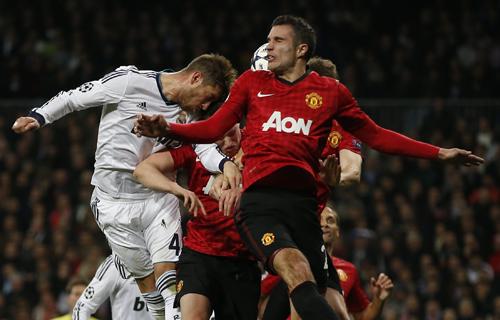 The versatile defender or midfielder suffered the injury during last month’s FA Cup fifth round victory over Reading.

Jones put in a top-class performance in the first leg of the European tie last month, man-marking Real forward Cristiano Ronaldo during the 1-1 draw.

Ronaldo scored with a towering header but Jones was not to blame.

“His performance over there was absolutely excellent,” Ferguson said. “It’s a miss but we can’t deem it as something we can’t manage, we’ve got options.”

Ferguson added that United’s main task against Real would be to put in a strong defensive performance to keep a lid on any breaks by the Spanish visitors.

“It probably will be the key to the game,” he said. “I believe they are one of the best counter-attacking clubs in Europe … we’ve got to find a way of coping with that but also having our own threat in an attacking sense also.”

One of those attacking threats could come from midfielder Ryan Giggs, who will make his 1,000th professional appearance in Tuesday’s match at Old Trafford.

The Argentine produced a cool finish to punish a defensive mistake just before halftime and though not playing at full throttle City were rarely troubled as they claimed a victory that left Villa in the bottom three.

United, who face Real Madrid in the Champions League last 16 second leg on Tuesday, still look unstoppable in pursuit of a 20th English title with 71 points. With 10 games left to play City have 59 points and Tottenham Hotspur are third on 54.

Villa, needing a point to climb out of the relegation zone above Wigan Athletic, dominated the opening 20 minutes and nearly went ahead when Christian Benteke’s goalbound header was booted off the line by Tevez on the post.

City gradually settled into their rhythm and Pablo Zabaleta was unlucky not to give them the lead after 36 minutes when his shot was finger-tipped against the inside of the post by Villa keeper Brad Guzan.

Villa looked like reaching halftime unscathed but a moment of madness from defender Ciaran Clark undermined a hard-working first-half display by the hosts.

Attempting a fancy turn rather than a simple thump forward, he was dispossessed by Edin Dzeko and the Bosnian squared for Tevez who danced past Guzan before slotting into the net despite Clark’s attempts to get back on the line.

Tevez nearly increased City’s lead shortly after the break when he weaved across the area but his shot was beaten out by Guzan who was by the far the busier of the two goalkeepers.

Nothing much was coming back from Villa with City keeper Joe Hart being a virtual spectator before frantic late pressure from the home side brought no reward.


Mourinho wants to still be managing at Ferguson’s age
Reuters / Phuket Gazette
PHUKET: Jose Mourinho hopes he is still managing in his seventies like Manchester United’s Alex Ferguson, the Real Madrid boss said as he prepared to face him in a Champions League clash “the world will stop to watch”.

At 50, the Portuguese has a couple of decades to go if he is to still be working at 71 like Ferguson, whose side host the Spanish champions in their eye-catching Champions League last 16 second leg tonight (kick-off 2:45am tomorrow morning time).

“So yes I (can) imagine (it) … and I would love that God gives me health so I can do it. Sir Alex is unique, I don’t have any words to add to what everybody says about him and respect he has from everyone.”

With the tie between two of the continent’s heavyweights delicately balanced at 1-1, Mourinho said Tuesday’s game seemed an even bigger event than its billing.

“Tomorrow the world will stop to watch this tie,” he said. “This doesn’t look (like) a tie, it looks (like) a final, let’s see which teams arrive at Wembley (for the final) but I doubt that the expectation can be bigger than this one.”

Fantastic run
Although he said he had “no idea” what was going to make the difference between the two sides on the night, the former Chelsea, Inter Milan and Porto manager has plenty of experience of Manchester United encounters to draw on.

Not least the moment nine years ago when as Porto manager he dashed madly up the touchline to celebrate his team knocking United out of the Champions League.

With the experience of more than 100 matches in Europe’s elite club competition now, Mourinho reckons he would react differently if he knocked them out again on Tuesday.

“That match was my first season playing Champions League football,” he said.

“I think I can control in a different way my emotions – so if I lose tomorrow I don’t cry and if I win I don’t run 100 metres for sure.”

With both teams on good runs – Real having recorded back-to-back wins over arch rivals Barcelona and United clear in the Premier League – Mourinho said he had no idea what would divide them on the night.

“They are in a fantastic run,” he said, joking that United had won the Premier League already.

“But we are also in a good form in 2013. That’s the million dollar question – who knows what is going to make the difference.”

Real will hope it might be forward Cristiano Ronaldo, who scored the equaliser in the first leg against his former club.

Team mate Xabi Alonso, who used to face Ronaldo during his Liverpool days, was glad he was playing with him rather than against him.

“He’s in terrific form at the moment, he has been very decisive in many, many important games,” he said. “At the moment I am lucky enough to say he is on my side and I prefer to have him on my side.”