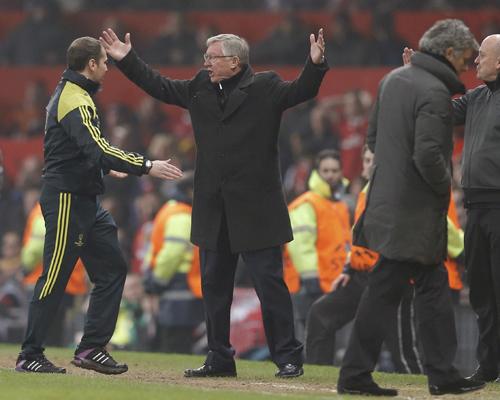 PHUKET: Former Manchester United hero Cristiano Ronaldo scored the winner against his old club to give Real Madrid a 2-1 victory at Old Trafford and a place in the Champions League quarter-finals last night.

United, 1-0 up in the game after Real defender Sergio Ramos put through his own goal in the 48th minute and 2-1 ahead on aggregate, were sent reeling in a 10-minute spell midway through the second half as Real secured a 3-2 aggregate success.

The match changed when United winger Nani was harshly shown a red card in the 56th minute by Turkish referee Cuneyt Cakir for a clumsy but not dangerous high challenge on Real defender Alvaro Arbeloa.

Ten minutes later substitute Luka Modric, who had only been on the field for seven minutes, lashed in Real’s equaliser from 20 metres and Ronaldo slid in at the far post to turn in a cross from Gonzalo Higuain to seal Real’s place in the last eight.

It was a special night at Old Trafford as 39-year-old Welsh winger Ryan Giggs made his 1,000th competitive appearance and Ronaldo was warmly greeted on his first return to the ground since he left for Real in 2009.

United went close to opening the scoring after 21 minutes when Nemanja Vidic thundered a powerful downward header against Diego Lopez’s left-hand post, only to see the ball rebound to Danny Welbeck.

The England forward had little time to react but shot first time straight at the keeper sitting on the line, who smothered it between his legs. TV replays, however, showed Welbeck was in an offside position and the goal would not have counted.

Both teams made chances as play flowed from one end of the pitch to the other, but United appeared to be the more settled side and went into a deserved lead, even though they were fortunate that Ramos turned Nani’s cross into his own net.

Real, though, laid siege to United’s goal after the hosts were reduced to 10-men and they scored twice in the last 21 minutes as Modric and Ronaldo found the net.

Although Robin Van Persie and late substitute Wayne Rooney went close, Real held out for the win to stay on course for a record-extending 10th European Cup success.