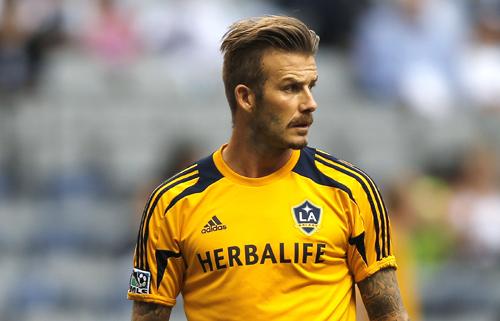 The 37-year-old midfielder is a free agent after leaving LA Galaxy at the end of the Major League Soccer (MLS) season in December.

“He has asked to come here and to work on his fitness. He has not done anything for a long time,” Wenger told reporters.

“He called me. It is purely for fitness there is no speculation about him signing.

“We get nothing out of it, just to help somebody who we think deserves it and has made great service for English football.”

PHUKET: Mario Balotelli, whose wacky antics have filled the British newspapers almost daily in the last two and a half years, is set to return to Italy with AC Milan after a deal was agreed with Manchester City.

The Italy striker, a boyhood Milan fan, first broke through at rivals Inter Milan and is returning home for a fee media reports have put at 20 million euros (17 million pounds) after a largely frustrating spell with the English champions.

PHUKET: Shanghai Shenhua fans were not surprised to see star strikers Didier Drogba and Nicolas Anelka end their Chinese odyssey after just one season, accepting that the high-profile duo had a desire to play at a higher level.

Ivory Coast international Drogba concluded his brief spell in the Chinese Super League when he agreed to an 18-month contract with Turkish club Galatasaray on Monday, after Anelka had joined Italian giants Juventus on loan two days earlier.

Both strikers appeared content to opt for the lure of European Champions League football over the reported $300,000 per week salaries in one of Asia’s fastest growing but still developing leagues.

“You know Chinese football is on the second or third level in Asia. They are not on the same level. So Anelka needs to play in a better team. So I don’t feel any shock about his leaving,” 31-year-old Shenhua fan Gu Zhonghua told Reuters.

PHUKET: Max Barrios, denounced as a 25-year-old Ecuadorean and sent home from the South American Under-20 championship where he played for Peru, could be sent to prison if he is proved to have falsified his identity.

“If (the crime) has been proven, the alleged Peruvian could go to prison for seven to 10 years,” national prosecutor Jose Pelaez told the TV Peru Noticias television channel late on Monday as he confirmed Barrios was under investigation.

Pelaez added that the defender’s alleged father, Peruvian former footballer Angel “Maradona” Barrios, is also being investigated as an accomplice.

The possible scandal came to light when Peru met Ecuador earlier this month during the Under-20 championship in the Argentine Andean region of Cuyo.

Media reported that members of the Ecuador side said they had seen the defender playing in their country and that his name was not Barrios.

They said he was identified by a member of their country’s congress as Juan Carlos Espinoza Mercado, a 25-year-old Ecuadorean.

Premier League bottom side QPR said in a statement the 27-year-old centre back had joined Bursaspor, seventh in the Turkish league, until the end of the season.

Ferdinand, who made 49 appearances for the west London club after joining from Sunderland in 2011, is the latest player to move to a championship that was previously shunned by big names.

Ferdinand is not the only Englishman at Bursaspor after former England goalkeeper Scott Carson joined the club in 2011.

The defender’s departure increases the likelihood that South Korean defender Yun Suk-young will join compatriot Park Ji-sung at QPR after his Korean side Chunnam Dragons said a deal had been agreed.

PHUKET: West Ham United have signed Austria defender Emmanuel Pogatetz on loan until the end of the season, the Premier League club said.

The versatile Pogagtetz, who joined West Ham from Bundesliga club VfL Wolfsburg, has more than 50 international caps and played for English club Middlesbrough from 2005-10.

“I feel very good to be here and I am excited about playing for West Ham,” the 30-year-old former Bayer Leverkusen player told the West Ham website.

“I will be doing my best play well and hope I can play a part in the club achieving their targets for this season,” Pogagtetz added.

West Ham, who have a number of defensive injuries, lie 12th in the 20-team Premier League standings, eight points above the relegation zone with 15 matches left this season.

PHUKET: Real Mallorca have agreed to take Scotland defender Alan Hutton on loan from Aston Villa until the end of the season subject to a medical, the Premier League and La Liga clubs said in statements.

The Spanish side have the option to agree a permanent deal in the close season.

The 28-year-old has had stints with Villa, Rangers and Tottenham Hotspur among others, and will be presented on Tuesday, Mallorca said.

Mallorca are 19th in La Liga, three points from safety after a 3-2 home defeat to Malaga on Sunday.

PHUKET: Juventus coach Antonio Conte has been given a two-match ban for insulting match officials following the Serie A leaders’ 1-1 draw at home to Genoa on Saturday.

Sporting director Giuseppe Marotta was banned for three weeks for a similar outburst and defender Leonardo Bonucci was given a one-match ban for his behaviour, the league’s disciplinary commissioner said in a statement.

Juventus – three points ahead of Napoli – were livid at several refereeing decisions in the game, especially the referee’s failure to award them a stoppage-time penalty for handball against Genoa defender Andreas Granqvist.

Conte ran onto the pitch, ranted at officials and later described the refereeing as “shameful”.

Marotta made references to the fact that referee Marco Guida i