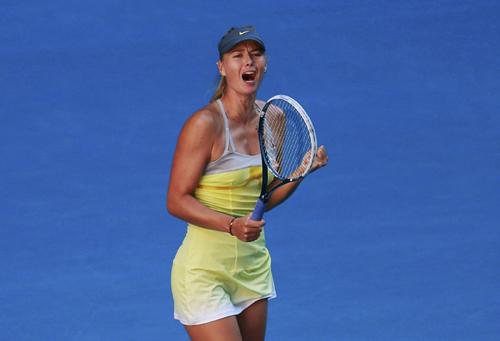 Sharapova had not lost any of her previous five Australian Open quarter-final matches, a record she extended with ease against the 19th-seeded Makarova with a 6-2 6-2 victory. The pair had met in the same round last year at Melbourne Park.

The 24-year-old Makarova had beaten 11th seed Marion Bartoli and fifth seed Angelique Kerber to make the quarter-finals, but was unable to stop Sharapova’s rampant march through the tournament.

Sharapova has dropped just nine games in total, the fewest number conceded by a semi-finalist at the tournament.

Monica Seles conceded just 12 games on her way to the 1991 semi-finals.

Sharapova, who won the Australian Open title in 2008, will now meet sixth seed Li Na in the semi-finals on Thursday after the Chinese upset fourth seed Agnieszka Radwanska 7-5 6-3 earlier on Rod Laver Arena.


Ferrer survives in “miracle” fight back
Reuters / Phuket Gazette
PHUKET: David Ferrer stared defeat full in the face three times but staged an epic comeback from two sets down to beat fellow Spaniard Nicolas Almagro and reach the semi-finals of the Australian Open on Tuesday.

The fourth seed looked to be heading for the exit when, having been dominated by some brilliant play from the 10th seed for the first two sets, he faced Almagro serving for the match at 5-4 in the third.

It is not for nothing that Ferrer is known as one of the best fighters in tennis, however, and he hustled along the baseline to claw his way back into the contest and take the third set on Rod Laver Arena.

Twice more Almagro had chances to serve out for victory but he blew them both and Ferrer, who had won all 12 of their previous meetings, emerged a 4-6 4-6 7-5 7-6 6-2 winner after three hours and 44 minutes on Rod Laver Arena.

“It was a miracle I won this match,” said Ferrer, who will face Novak Djokovic or Tomas Berdych in the last four.

“I tried to fight and do my best (but) next round… I need to play my best tennis, better than today. Now I will need to rest but I have a day and a half.”

Almagro contributed to his own downfall by stuttering when he had victory within his sights and his body let him down in the last two sets when he was hindered by a leg injury.

“I think I played my best tennis today but it wasn’t good enough to beat David,” he said.

Ferrer, 30, has lost all four of his previous grand slam semi-finals, including defeats to world number one Djokovic at the U.S. Open in 2007 and last year.

He will undoubtedly be hoping the defending champion is still tired after his marathon fourth round victory over Stan Wawrinka when he takes on fifth seed Berdych in the final singles match on Rod Laver Arena.


Li beats Radwanska to make Melbourne last four
Reuters Phuket Gazette
PHUKET: Li Na wore down Agnieszka Radwanska with a barrage of power-hitting to beat the fourth seed 7-5 6-3 and advance to her third semi-final at the Australian Open earlier today.

The Chinese sixth seed overcame her customary slow start to edge the Pole in a tight first set and after trailing 2-0 in the second, reeled off five straight games to march to the brink of victory in bright sunshine at Rod Laver Arena.

Li survived a late wobble conceding two break points when serving for the match, but reeled off five straight points to seal it after 102 minutes when Radwanska pushed a forehand long.

Li, runner-up to Kim Clijsters in 2011, will face the winner Of the match between second seed Maria Sharapova and fellow Russian Ekaterina Makarova for a place in the final.