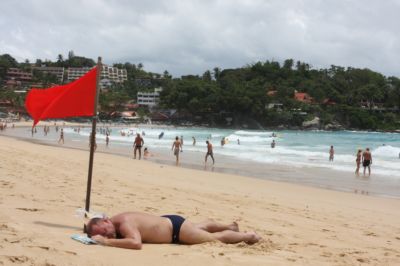 PHUKET: Phuket Gazette readers favor a tourist information campaign as the most effective way to prevent drownings on Phuket’s beaches, according to the last Gazette Poll.

Of 806 readers who voted, 34 percent thought a campaign warning of the dangers of swimming in the sea was the best way to prevent more deaths.

Thai nationals were only 25 percent in favor of such a campaign, while 35 percent of expat residents and 36 percent of tourists favored this option.

Meanwhile, 29 percent of voters thought beaches should be completely closed when conditions are dangerous.

Around 20 percent of readers thought all that was needed was to provide the island’s beach guards with better equipment.

Finally, around 16 percent favored the most draconian option: to prosecute swimmers who ignore red flags.

There have been at least 10 drownings of tourists off Phuket’s beaches so far this monsoon season.

Beach guards have been stationed at the island’s most popular beaches since the end of June, but this has not put a stop to deaths in the sea.

A local leader in Karon, where several drownings have occurred, recently warned that more were ‘inevitable’ unless better equipment was provided to the beach guards.

In the latest tragedy, an elderly Norwegian tourist drowned in the calm waters of Ao Yon.