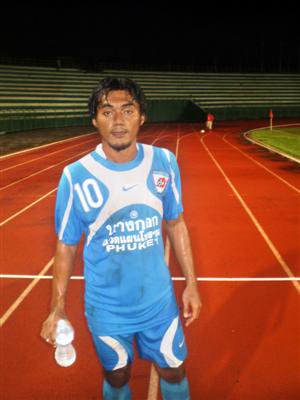 Despite taking an early lead, the reverse means that Phuket FC are still without a point in front of their home fans.

The Sea Dragons started brightly and were rewarded with an early goal. Stocky center forward Ronarrong burst through the Pattani defence and poked home the opener after an initial save by the Pattani keeper.

The initial excitement was short-lived as Phuket allowed Pattani to grab an equalizer following some poor defending; failure to clear a routine corner led to a frantic goalmouth scramble and the ball was smashed past the helpless Phuket keeper from close range.

With the scores level after 45 minutes, Phuket FC were half way towards securing their first ever home point.

Phuket made a promising start to the second half as goalscorer Ronnarong again got behind the Pattani defence, only to be denied by the goalkeeper.

After their narrow escape, the away side pressed forward and a Pattani striker was sent clean through on goal only to take a theatrical tumble in the penalty area. Bizarrely, the referee awarded Pattani a free kick on the edge of the box, much to the frustration of both sets of players.

A moment of comedy ensued from the resulting free kick as the Phuket FC keeper attempted to palm a high ball into touch only to watch in horror as the ball went towards his own goal.

The keeper was saved from the ignominy of pushing the ball into his own net when it bounced back off the bar and dropped into his arms.

Soon after this near miss, Pattani sprung the Phuket offside trap and their striker held his nerve, scoring the goal that would ultimately condemn Phuket to yet another home defeat.

As time ticked by, Phuket forced a smart save from Pattani’s Cameroonian keeper and from the resulting corner rattled the cross bar with a thunderous half volley. Despite their endeavor, it was too little, too late for the Sea Dragons as Pattani closed out the match.

A change of management has delayed plans to hold trials aimed at adding some foreign talent to the squad. For the Phuket FC fans it cannot come soon enough as they watch their side struggle week in, week out.

In fact the Phuket supporters were clearly out-cheered and possibly even out-numbered by many Pattani natives living in Phuket who turned up for the match.

Speaking of the sparse attendance at Surakul, Pattani player M. Mama told the Gazette after the match that his team enjoyed a packed stadium every time they took to the pitch at home.

Next up for the Sea Dragons is a trip to Narathiwat on May 23 before the mid-season break. Phuket FC’s next home game will take place at Surakul Stadium on July 5, also against Narathiwat.