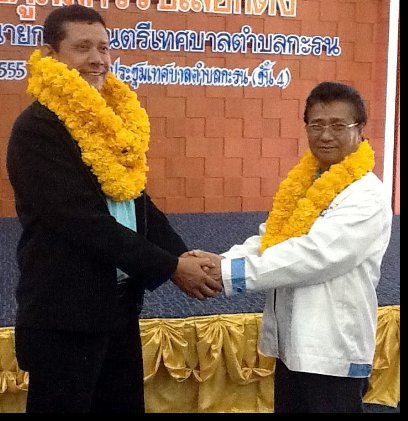 PHUKET: Registration closed yesterday for candidates to enter the Karon Municipality mayoral and council election, to be held on July 15.

Tawee Thongcham, who has served as Karon Mayor for the past eight years, is running for re-election to his third term in office.

His only contender in the poll is Narong Natang.

Both men, accompanied by their prospective council teams, turned up at the Karon Municipality Office early on Monday, the first day of registrations, to enroll as mayoral and council candidates.

Having officially opened the election enrollment, Phuket Election Commission (PEC) Director Kittipong Thiengkunagrit told the hopeful candidates that they would have to draw lots to determine who would get candidate numbers one and two, as both parties had arrived before the six-day application period officially began at 8:30am.

The only independent running for election, Prathum Yodkaew, who is contesting a councilor’s seat in Kata-Karon Voting District 1, was assigned ballot number 13.

Weerasak Anakewongsawad, Chief Administrative Officer (Palad) of Karon Municipality, expects many voters to turn out for the election.

Both main parties announced similar themes for their campaigns, focusing on health, education, security and the environment.

In line with existing Thai electoral law, an alcohol ban will be in effect for both Kata and Karon from 6pm Saturday, July 14, until midnight on Sunday 15.