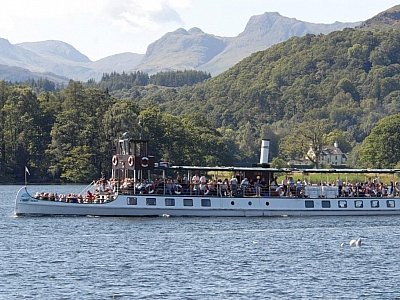 PHUKET On its way to London, the Olympic Torch traveled aboard the Tern one of the oldest steamers on Lake Windermere, England’s longest lake.

The torch was carried by local schoolgirl Stephanie Booth on the vessel, which is operated by Windermere Lake Cruises. Managing Director Nigel Wilkinson said “The Tern was built in 1891, 5 years before the start of the modern Olympiad. She is part of Britain’s national historic fleet, one of the 200 most significant vessels in the country.”

The Lake District’s sporting connections include many world records. Sir Henry Segrave broke the world water speed record on Windermere in his boat Miss England in 1930.

On neighboring lake Coniston Water, Donald Campbell broke the record in 1955 in his now famous craft Bluebird K7. He remains to this day the only person to set both world land and water speed records in the same year. His later attempts to improve on his record ended in disaster when Bluebird exceeded the previous record speed, somersaulted in the air, and plunged into the lake killing him instantly.

The wreckage of Campbell’s craft was recovered in 2001. It is currently undergoing restoration and will soon be housed in the Ruskin Museum, Coniston Water, where it will be open to the public.

The Olympic torch continues its journey around the UK arriving in London on July 27 for the opening ceremony of the Olympic Games.