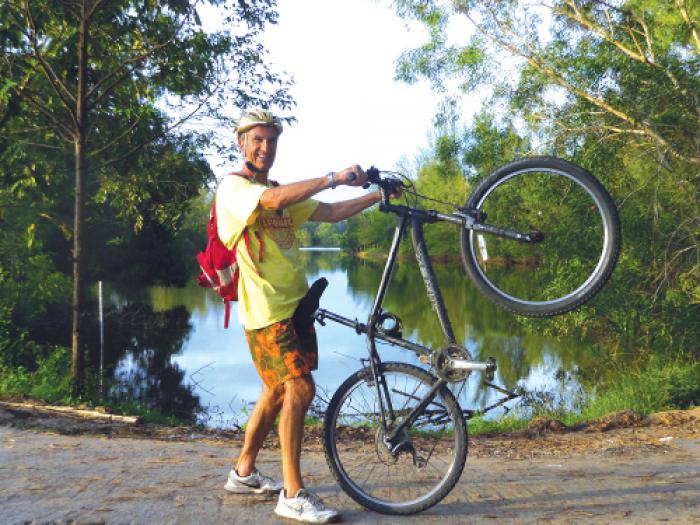 PHUKET: New Age guru Eckhart Tolle sold millions of copies of his book The Power of Now which expounded the blindingly obvious premise that we would all be much happier if we lived our lives in the here and now. Tolle tells us over 256 repetitive pages, that rather than worrying about what might happen tomorrow, or regretting our misdeeds of the past, we should just relax and concentrate on the intense beauty of being alive, right at this very moment.

While this may be a simple premise to state in a book, it’s a lot more difficult to put into practice in Phuket these days. Increasingly, we inhabit a globally wired, 24/7 world, where our livelihood and possibly our very survival depend upon a sort of continuous information overload. The result is an increasingly stressed populace whose consciousness is severely fragmented, so that the apparently simple practice of being present here and now starts to seem like an unattainable transcendent state from a simpler, quieter century.

Phuket cyclists are certainly victim to this fragmentation, and our very survival does indeed depend upon unrelenting vigilance, in order to cope with the myriad problems that make cycling on the island such a challenge. Inevitably, we seek quieter, cyclist-friendly environments, which, fortunately, abound right upon our doorstep.

Although only an hour by boat from Phuket’s east coast, the two verdant Yao islands (Yao Noi the smaller and Yao Yai the larger) are a refreshing step back in time, where relaxed cycling in the here and now is a joy once again.

On a recent sizzling morning I loaded my trusty mountain bike into the prow of a speedboat from Bang Rong Pier on the northeastern coast of Phuket and headed for Koh Yao Yai island. Just 70 minutes later, bike and man were hauled up the concrete steps at Klong Hia Pier, and almost immediately, I found myself back in the quiet undisturbed now of a bygone age.

Koh Yao Yai transliterates as “Big Long Island” and indeed it is a long boomerang-shaped expanse stretching for about 50 kilometers north to south, equidistant from Phuket to its west and Krabi to the east.

The cycling is very relaxing and the main road which runs right down the spine of the island is well paved with just enough hills to make life interesting and aerobic. About half a click from the pier you can take either the west coastal, or east costal road – either offers you great sea vistas where they run along the island’s coast. They join again about half way down the island and then it’s one straight road all the way down to Pru Nai Township near the southern tip.

I chose to cycle down the island’s east coast road through spindly rubber trees, each with a tapper’s cup appended and spotted ancient black steel rubber presses standing sentinel outside some of the little shacks, with pressed sheets of latex flapping in the island’s breeze.

I passed little Muslim homes, flower-bedecked and proudly maintained, often with sleeping cats (but of course no doggies) on their porches.

Almost all the doors stood open to the island’s breezes, even though no one was around, a strong testament to the close sense of community and trust that characterizes the island.

Cresting a hill, I almost crashed into a couple of black and white goats lying in the middle of the road – such is the traffic density in these parts. These denizens of Hades elected to clop along just ahead of my front wheel, neck bells clanging, for about a hundred meters, before figuring out that a sharp left turn into the safety of the rubber trees was called for.

Skirting a hillside of terraced paddies hosting a convention of silently munching buffaloes, I came to the village school at Klong Don just as it was disgorging its boisterous contents. Here I saw three kiddies, whose combined age was probably under 16, on a Honda Dream – any laws that might apply to the age of drivers being summarily ignored.

These under-age speedsters were clad in perfectly-pressed scouting uniforms, presumably heading off to some campfire jamboree and sing-along. A motorcycle and sidecar overtook me bedecked with perhaps ten further acolytes of Lord Baden Powell, almost knocking me ditchwards in a happy greeting of “hello farang”.

In Pru Nai Town I stopped at a little shop to buy some gluay… little ladies’ fingers bananas costing just 20 baht for a bunch so big that I had to call in eating reinforcements in the form of three pig-tailed girls, who rewarded me with luxuriant gap-toothed smiles.

Settling into the resort’s lovely open sala restaurant, I took off my cycling boots and savored a fabulous first icy beer. With a shock, I realized that for more than four hours I had been totally engrossed and charmed by the now of Yao. It’s a lot cheaper than doing the Eckhart Tolle course and it’s only 70 minutes from Phuket!