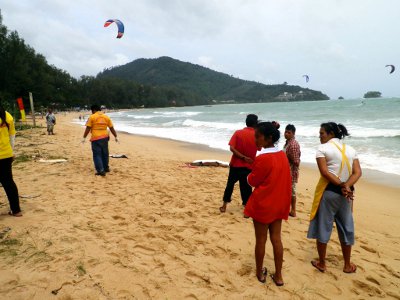 PHUKET: Police in Phuket are trying to identify a mutilated body that washed ashore at Nai Yang Beach yesterday morning as the first step in a murder investigation.

Tah Chat Chai police were notified of the discovery in Sakoo Village 1 at about 11am.

Arriving at the scene with Phuket Kusoldharm Foundation workers, Lt Col Prakob Boonkwan and fellow officers found that lifeguards had covered the body with a pha khao maa (Thai loincloth) and large pieces of plastic, all held down against the whipping monsoon winds by lengths of bamboo and chunks of concrete.

Underneath the coverings, police found the body of a man lying face up, dressed only in a pair of black briefs. The man appeared to have suffered a large puncture wound to the back of the skull. His nose and an ear were missing.

Col Prakob estimated the man was about 33 to 40 years old.

“From our initial inspection, he was likely attacked with a sharp metal object,” said the policeman, who quickly dismissed the possibility that parts of the man’s face might have been eaten by aquatic animals.

He estimated the time of death at about 6am, the same day.

“We questioned local residents, but none were able to identify him. The body was taken to Thalang Hospital for further examination,” said Col Prakob.

A rescue worker at the scene said he thought the body appeared to be that of an Asian, probably Thai, though possibly Burmese, he said.