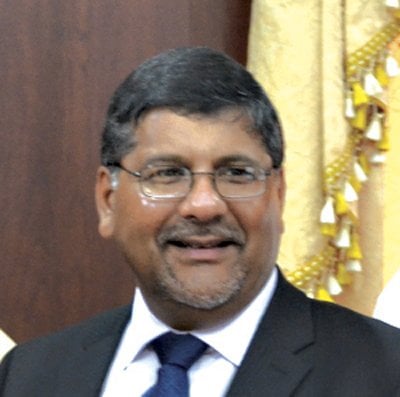 PHUKET: After a moving ceremony handing out IB diplomas to graduating students at the British International school, HE Ambassador Asif Ahmad took time to speak with the Phuket Gazette about the strong links between the two countries.

HE Asif Ahmad was made Ambassador to Thailand in late 2010 but had traveled frequently to the Kingdom, first as Director- Asia for UK Trade and Investment and more recently as Head of the South East Asia and Pacific Group for the Foreign and Commonwealth Office.

A holiday destination for more than 850,000 British citizens a year, Thailand is also home to a number of British businesses and trade flows well between the two countries. One of the embassy’s roles is helping British companies to succeed in Thailand and South East Asia and to smooth the path for Thai investors in the UK.

“My main job is to look after national interests, whether it be UK citizens themselves or the UK economy, which currently needs all the help it can get. We try to help UK businesses here. These come in all shapes and sizes, from an individual selling his services as a consultant to the other extreme such as Tesco, which has well over a 1,000 stores in Thailand, or Boots with 200. For example Triumph make most of their motorbikes here,” he said

Asked about Thai investors in the UK he had this to say: “The single biggest investment into the UK last year, from any country in the world, was from Thailand.

Sahaviriya Steel invested in the closed Teeside steel plant, saving and creating over 1,500 jobs. Right now there is a trade deficit between Britain and Thailand. Thailand outsells Britain by over a billion pounds a year. This one deal alone will equalize that as we will have steel from Teeside coming to Thailand at a value of a billion pounds a year from now on.”

As for the future, HE Ahmad says the big challenge for mature economies like those in the UK and America is to be able to participate in Asia’s growth.

“Future growth will not just come from India and China, which we always seem to mention, but also from the Association of South East Nations (ASEAN). The UK already sells more to the ASEAN community than India and China put together. That doesn’t mean we should be happy about that; it means we should sell more to China and India. The opening up of ASEAN however is a great opportunity for us to sell everything from food processing technology to pharmaceuticals.”

On the subject of the recent graduates’ prospects in the UK he had this to say: “As I told the students here today, one gift they now have is the English language – this is the language of Asia and the World. Many students here have the advantage of being able to speak more than one language and this is a huge advantage for them. Around 6,000 Thai students currently study in the UK and students from International schools like this one [BIS] need no conversion when they arrive in the UK as they already speak the global language.”

London Olympics to give Thai food exports a boost

A Thai trade official has projected that the value of food exports to the United Kingdom (UK) this year will exceed US$ 1.2 billion (38 billion baht), as the Summer Olympic Games in London boost demand and economic growth despite financial turmoil in Europe.

“Although the financial crunch in the European Union has had an impact on Thailand’s exports, demand for Thai products in the UK market, particularly foods, has not been affected as Britons have good consumer sentiment ahead of the Olympic Games,” said Chulit Stavorn, executive director of the Thai Trade Center in London.

Last year, exports of Thai food products to the UK were worth US$ 1.1bn. Major export products were processed chicken, worth US$ 555mn (17.6bn baht), followed by canned seafoods, frozen shrimp, rice, noodles, processed foods and fresh and canned fruits.

Chulit said the EU’s cancellation of its import ban on fresh chicken from Thailand in July would also boost the Kingdom’s poultry exports to the UK and EU markets. He expects that Thai chicken exports to the UK should increase by US$ 400mn (12.7bn baht) this year.

Chulit also expects that the plan of CP Foods, Thailand’s leading food producer, to take over Birds Eye, a giant British fish-finger producer, will boost trading opportunities for Thai products in the UK if the bid is successful.

The deal is not yet finalized, as more than three firms are interested in taking over Birds Eye.